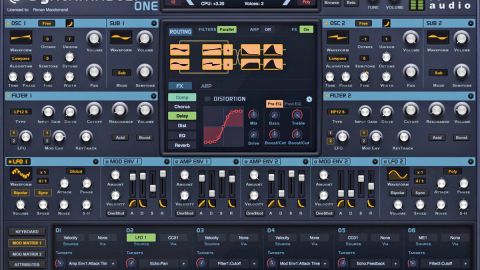 With dual wavetable oscillators, stunning filters and fast-paced interface, SynthMaster One sounds fantastic and stays out of your way while you work!

A less complicated offshoot from its flagship SynthMaster 2.8, KV331’s SynthMaster One is two-oscillator polyphonic wavetable synth with a single-screen interface that keeps (almost) everything in reach at all times.

Generally speaking, it’s about as beginner-friendly as a serious synthesiser can be - which is to say, it’s a lot more beginner-friendly than its big brother but will still be totally intimidating to anyone who’s never used one before. That’s not a criticism; it’s an inevitability with any synth that isn’t deliberately dumbed down, which SynthMaster One certainly isn’t...

SynthMaster One ships with a healthy library of 500 presets, designed by the likes of Arksun, Vorpalsound and Xenos Soundworks, and accessed via a tagged Browser (Author, Instrument Type, Attributes and Style). User patches can be tagged and/or added to a Favourites list, but there’s no search function.

The same ‘Upload preset to online library’ right-click option found in SynthMaster 2.8’s browser is in place, but there doesn’t appear to be any way to access said library as yet.

The two oscillators each offer the usual analogue waveshapes - Sine, Triangle, Square, Sawtooth and Pulse - but, really, SynthMaster One is all about more elaborate digital waveforms and wavetables.

At the most basic level, SynthMaster One’s Arpeggiator/Sequencer works as a straight-up arp, with all standard directional modes present and correct - Up, Down, Up+Down, As Played, etc. You get up to four octaves of range, up to 16 volume-adjustable steps, the gamut of playback speed note values from 1/32 to 2/1 including dotted and triplet options, swing timing, and gate time control by extending/shortening individual steps in the bar display or twisting the Duration knob.

Rather more interesting, though, are the other three arpeggiation and sequencing modes. Ported over from SynthMaster 2.8, the ingenious - if at times mildly baffling - Arpeggiate mode hands you full control of the note-to-note progression of the arpeggio, specifying which note from the chord should be played on each step (1st, 2nd, 3rd, Last, one or two steps above/below the previous step, or Random), with Slide and Hold toggles. Steps can be left empty, too, for rests.

Sequence mode is a conventional piano roll step sequencer boasting up to four notes of polyphony and, again, per-step Slide and Hold. You can draw notes in by hand or activate Record mode and play them in step by step, either at their played velocities or fixed at 127.

Finally, Chord mode plays back the held chord, as opposed to its constituent notes, in a rhythmic sequence - just the thing for big trancegate-style pads.

While SynthMaster 2.8 features its own form of wavetable functionality, enabling up to 16 waveforms from its extensive onboard library to be strung together contiguously, SynthMaster One takes a very different approach. Rather than let you build your own within the synth, it includes 150 pre-made wavetables captured from a Who’s Who of hardware synths by Moog, Roland, Korg and others, and grants you the ability to import your own.

This couldn’t be easier: simply place a singe-cycle WAV or wavetable (defined by KV331 as a waveform containing multiple periods, the length of which is divisible by 2048 samples) in a subfolder of the Wavetables folder to have it show up in the oscillator menus.

While obviously it would be great if there was a wavetable editor built in - like that of Xfer Records’ Serum, for example - it would detract from SynthMaster One’s immediacy and presumably raise the price, so we can appreciate the reasoning behind the omission.

Separate to the wavetables, the oscillator Waveforms menu houses more than 150 single-cycle waves (drawing on the same sources as the waveforms) - a diverse wealth of static tonal starting points.

Scanning through the wavetables is done with the Index knob at the bottom left of the Oscillator panel, which becomes the waveshaper Tone control when a regular waveform is loaded, partnered with the adjacent Phase knob. Using the menu above, one of 13 waveshaping algorithms is loaded into the oscillator, directly processing its raw output with a range of filtering, syncing and waveform warping and distortion treatments.

While Tone always controls filter frequency, Shape operates different parameters depending on the algorithm - but with no contextual naming, it can be pretty confusing. For example, the Lowpass Spectrum algorithm sees it shifting the phase, while LowShelve assigns it to gain; and under the Sync algorithms, it sets the sync frequency.

If Tone can change to Index for wavetables, surely Phase could be renamed appropriately to the selected algorithm. That aside, the waveshaping section is incredibly useful for sharpening up, skewing and enriching those raw shapes.

Incidentally, if you’re wondering what happens to the Tone parameter when a wavetable is loaded, it’s still available in the Modulation Matrix, where it’s assignable to a macro knob for manual adjustment.

SynthMaster One doesn’t hold back in the unison department. Each oscillator stacks up to 16 voices with variable detune (including detune curve control) and stereo widening, and a Free mode that randomises the phase of each new voice for a more organic vibe. The oscillators are also partnered with sub oscillators, able to output all the non-wavetable Waveforms, as well as a variety of noise types, and deployable as audible voices or for amp, ring, phase or frequency modulation of the associated main oscillator.

The two zero-delay feedback filters have 13 modes and types in Ladder, Diode Ladder and State Variable categories, modelling Moog, Roland TB-303, Oberheim SEM and Korg MS-20 filters respectively. Input Gain and Drive knobs push and warm up the signal, while the Acid and Boost buttons connect cutoff and resonance, 303-style (so that resonance increases as the filter opens up), and counteract the volume reduction of high resonance in Ladder and Diode Ladder modes.

With six insert slots drawing on a roster of 11 effects, SynthMaster One has plenty of signal-processing and polishing scope. The effects share a tabbed space in the interface’s centre with the Arpeggiator, the six modules are reordered by dragging and dropping, and the whole rack can be bypassed with a click of the FX On/Off button.

The effects themselves are clearly lifted from SynthMaster 2.8. Despite a few controls having been trimmed off along the way, they still make for an impressive and colourful bunch. The highlights for us are the Distortion, which is an instant toughener; the tidy six-band EQ; and the Delay, which retains 2.8’s shelving EQ and ping-pong mode, but loses the distortion.

As well as those, there’s filtered digital distortion (sample rate and bit depth reduction) with LoFi, modulated delay action with Chorus and Ensemble, and LFO-based channel offset with Phaser. Apart from the lack of sidechain input, Compressor is identical to its surprisingly well-equipped 2.8 counterpart (it’s even got variable Knee), and Reverb retains the vast majority of its original functionality and parameters, too.

Finally, the 16-band Vocoder requires loading as a MIDI-controlled effect, and Tremolo features independently adjustable speed and phase for the left and right channels. It’s a very solid turn-out, then, marred only by the inability to load more than one of each effect into the rack at a time.

The filters are configurable in three routings, each one fed by its same-numbered oscillator; both receiving the mixed output of both oscillators; or with both oscillators feeding Filter 1, which then feeds Filter 2.  The particular routing scheme is selected in the Routing panel, where the oscillators, filters and amplitude envelopes are all graphically represented, and can be switched on and off.

SynthMaster 2.8’s filters are famously wonderful, so it comes as no surprised that One’s are every bit as good. The differences between the four modelled types are profound, each bringing its own character to the table and doubling up on the versatility already established by the oscillators.

Like the oscillators and filters, all six of SynthMaster One’s primary modulation sources - two LFOs and four envelopes - are ever-present in the GUI. The LFOs have access to the full Waveforms menu and are very well specified, with a choice of bipolar or unipolar movement, and Mono, Poly or Random per-voice phase, as well as adjustable fade-in, and Noise and S+H modulation. The ADSR Envelopes, meanwhile, feature variable Attack, Decay and Release curves, velocity sensitivity and a percussive One-Shot mode that skips the sustain stage.

Making assignments beyond the hardwired ones (LFOs and Mod Envs to filters, Amp Env to oscillator volume, dialled in with the amount knobs in each section) is done by dragging and dropping, or using the menus in the Modulation Menus, where Via depth modulators are also available. Alongside the LFOs and envelopes, all other expected sources are onboard (MIDI Velocity, Keytrack, polyphonic Aftertouch and CCs, macros), along with Unipolar and Bipolar Random, and Alternating (jumping between two values with each successive note).

The modulation Target list covers every knob and slider (including those of the effects), as well as a number of unison parameters that can only be got at through the Modulation Matrix: Voices Mix, and Wave Index, Tone and Phase Spread. A maximum of 12 sources can be assigned to up to two targets each, and while that might not seem like a huge number, bear in mind that the hardwired LFO/envelope filter and amp routings don’t count towards it.

SynthMaster One does a superb job of transferring the essence and spirit of its epic stablemate over to a more hardware-style single-screen interface, resulting in a quintessential ‘workhorse’ instrument tooled up for all kinds of patches. Basses, leads,  plucks, keys and other attacking sounds are its forte, but it’s no slouch when it comes to pads, strings and FX, either, with the wavetables serving up a smorgasbord of rich, expressive textural foundations.

On the downside, there’s no manual at the time of writing (though the SynthMaster 2.8 one is included), we’d like the option to load more than one of each effect, and we look forward to that previously-mentioned Phase knob getting contextual legending in a future update.

Ironically, with SynthMaster 2.8 only costing another $20 but offering much more  in terms of features and spec, KV331’s masterpiece could prove to be the stiffest competition for its own sibling. What One has in its favour, though, are its unique, streamlined wavetable oscillators and that intuitive, hands-on workflow, which even die-hard synthesists will find more approachable than 2.8’s comparatively fiddly ‘supersynth’ GUI.

Ultimately, each is very much its own instrument, and SynthMaster One’s retro-inspired charms and huge, mix-filling sound put all thoughts of 2.8 out of your head once you start using it. Welcome to the family!