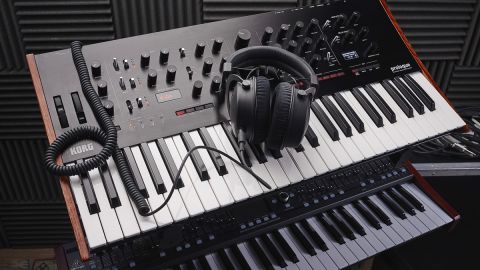 The ‘logue’ range has plenty of fans. From the monophonic Monologue, through to the original Minilogue’s analogue division has been going from strength to strength. With the rumour mill in full force, it was only a matter of time before the flagship poly void was filled.

The Prologue comes in eight- and 16-voice models - we have the former on offer here. The range is based on the same VCO found in the Monologue/Minilogue range. These are stable (tuning-wise) and sound present/clear yet full and vibey, giving the two-pole filter lots to chew on. Something to consider: Korg has chosen a single filter option in the Prologue range, which is a two-pole/12dB type that has been voiced to give the Prologue a unique character (which it does)!

The hardware itself is well-built and tank-like. Unlike the Minilogue, the Prologues feature separate pitch and mod wheels above the keyboard (which keeps things compact) and the case is black brushed aluminium (tilted), with chunky wooden sides and the same OLED display with oscilloscope, rudder switches, knobs and red backlit buttons found on the rest of the ‘logue range. The overall feel is classy and solid, and Korg is keen to point out that the Prologue’s ‘natural touch’ keyboard is made in Japan. Both Prologue models feature the same keybed type found on the Korg Kronos 61 and it feels very high quality and plays well generally.

However, there’s no aftertouch which is odd on a flagship board at this price, especially as the 16’s 61-note keybed already included the aftertouch strip on the Kronos. The Prologue doesn’t receive AT data either. Happily, there’s an expression pedal socket which helps, but if your feet are otherwise occupied with other synths it’s not ideal.

Power up the Prologue 8 and like the Minilogue, the display reads ‘tuning’ while all those lovely VCOs get tuned (though unlike the Minilogue you can’t play bat and ball)! The review unit did take a few minutes for the lower notes to pull into pitch and we had to re-tune a couple of times but generally it was stable.

The eight- and 16- models feature eight/16 voices respectively and both have two VCOs and a digital ‘Multi’ oscillator per-voice. In addition, the Prologues are two-part multitimbral so you can split and layer two completely different sounds and address each part over MIDI; the caveat here is that if you create a split/layer, the voice count will be split in half (so on the Prologue 8, each part will have only four voices) and you can’t allocate the voices to have 15 on one part and one on the other, or four on one side of a split and 12 on the other (for example). Regardless, for this reason it might be worth considering the Prologue 16 (if it fits your budget) as it will give you much more flexibility polyphony-wise.

So what’s this much-lauded mutli-oscillator all about? Firstly, it offers a noise category featuring four types of noise (low/high pass/peak filters and decimation) which you can use for making sound effects or to add grit to sounds (though it’s a shame you lose the whole oscillator if you just want noise).

Using the shape dial you can also affect different parameters including cutoff, bandwidth and the decimator’s sample-rate too (effectively it’s a bit-crusher). Next up is VPM, which is Korg’s own FM synthesis. Here the implementation is basic but it works very effectively for all manner of classic and new FM sounds - also the VPM mode has its own envelope for sculpting how the sound evolves over time.

The Prologues have space for 500 patches and the 250 presets onboard do a great job of showcasing its versatility. There are also some handy patch organisation features so you can easily fetch a layer for your sound, add favourites (likes) or select sounds based on envelope length or how often you use them. You can also create live sets to quickly move between sounds live, and jump through patches a hundred at a time. The Prologue 16 also brings the layering/splitting and voice-spread functionality onto the front panel, while the Prologue 8 has all this hidden in menus due to the more limited front panel space (this makes the Prologue 16 more intuitive).

Also note that you can crossfade between splits for smooth sound transitions. In addition, the Prologue 16 features an analogue LF Comp across its output which can be used to tame, smooth or expand the sonics. It sounds great and helps make basses pop/pump or it can simply add extra vibe to any sound - the only caveat is you can’t store the comp setting per-patch, so you must record your sound once you hit upon a sweet spot!

Using VPM feedback you can radically shape the selected VPM type and there are 16 handy VPM oscillator configurations onboard including types such as Air, Decay, Fat, Creep and Throat. These provide many different textures to add into the mix alongside the VCOs or to use in isolation. The results using VPM are excellent and in addition, the shape dial can change the modulator depth, plus, if you turn the shape while holding the shift button you can change the ratio amount for more overtones/harmonics.

You can also choose whether the multi-oscillator goes through the analogue filter or not, which is nicely flexible. While VPM looks simple on the surface, in practice it’s one of our favourite parts of the Prologue.

Downsides? Well, it would’ve been nice if it was possible to cross-mod the analogue oscillators via the digital ones (as on the Roland JD-XA) but that’s not possible here. The final category in the multi-oscillator is USER. This unfortunately isn’t user-sample upload (which would have been great) but instead this section features 16 user oscillator slots which can be populated with custom-made digital waves (open source) via the just-announced software development kit board.

These user waves and mod FX (once created) can be ported into the Prologue using a librarian and then processed just as any other native wave. How interesting this gets down the line is down to the developer uptake and memory limitations but it’s certainly intriguing!

Moving on to the sound-shaping possibilities and modulation, like the Minilogue, the Prologues have a voice-mode depth dial which changes role depending on the selected mode (four modes). In Poly mode this becomes a poly-unison control for bigger sounding poly patches, in Mono mode it adds a sub oscillator, in Unison the voices are stacked in mono and finally, Chord mode allows various chords to be triggered from a single note; these all add to the sonic palette greatly. Again (like the Minilogue and Monologue), each of the analogue oscillators has a three-position wave switch and each wave can be morphed in width/character using the shape dial, once more extending the tonal landscape.

Modulation-wise, there’s a fair amount on offer, though we were hoping for more options than the Minilogue (and there are fewer). Firstly, there’s poly-portamento, cross mod and a pitch envelope for the VCOs, with a single clock-syncable/audio-ratecapable LFO per-layer with three waveforms (the LFO can address one of three targets at a time including pitch, shape and cutoff).

As there’s no mod matrix as such (and with just one LFO), it does feel a little limiting at times, however, one of the chorus effects can add vibrato at least. We especially miss the LFO envelopemod from the Minilogue which was capable of delayed vibrato effects and we think for a flagship there really should have been two global LFOs and generally more flexibility mod-wise.

However, let’s not forget the ADSR envelopes (filter and VCA) which are nicely snappy and detailed and that there’s also ring-mod, sync, voice panning (to add width and drama) plus drive. In particular, this drive boosts volume and dirt in a very musical way, though we have to question the choice of a ick switch here; a dial would have allowed a lot more range and nuance (like the Monologue).

One other final note: while there is a basic arpeggiator onboard, the Minilogue/Monologue sequencer has sadly disappeared and along with it, the multiple lanes of modulation sequencing and ideas generation - a loss that many will miss. Perhaps Korg can add it down the line in firmware? Fingers crossed!

Most importantly, on the sonic front, the Prologues deliver massively and we found them very inspiring to work with, despite the aforementioned ‘limitations’. The character is definitely Minilogue-like at times but bigger and bolder and the filter (with low cut) sounds great, with bags of personality.

Additionally, the filter has a huge range of sweet spots with a resonance that can boost thickness/bass or add juice and piercing highs. It has that unmistakable Korg/'logue DNA that we loved in the Minilogue (precise, warm and with attitude) and it gives the Prologue a ‘look at me’ character (much like the DSI/Tom Oberheim OB6). In fact, the wiry, furry, edgy sounds the Prologues produce can sound almost OB6-ish; similarly this is an ‘ear-turning’ machine that excels as the main focus in a track or for background layers too.

However, it also delivers huge bass and cutting, searing leads, classic FM sounds, warm fibrous pads and punchy synth-brass – a testament to the versatile sound engine. Interestingly, the Prologue fares best, not on those often over-used classic VCO sounds but instead on moody, hazy, textured epic atmospheres. With a little voice-panning, along with the excellent reverbs, delays, and mod effects coupled with the vibey VCO and multi-oscillator, the sound palette moves into far more futuristic or contemporary territory - and that’s where this synth really delivers by the bucket load!