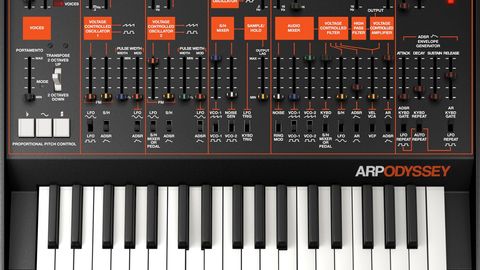 The most authentic software ARP Odyssey money can buy, Korg’s excellent synth is the new flagship of their Collection.

Back in 2015, Japanese music tech megacorp Korg teamed up with ARP co-founder David Friend to bring back one of the most sought-after instruments in the history of electronic music.

Created in response to the gamechanging Minimoog, the original ARP Odyssey analogue synthesiser found huge success in the 70s with its superior stability and feature set; and Korg’s 2015 hardware remake brought all of its sound and functionality, plus a few modern enhancements, to a whole new generation of players and producers.

While that was happening, it looked like Korg’s Legacy Collection of software synth emulations was slowly dying on the vine, having not been patched for yonks, and requiring attention in terms of new OS compatibility and AAX support. Recently, though, not only has Korg updated the MS-20, Wavestation and everything else in the Collection (the ‘Legacy’ bit has been dropped) to address said issues, but it has also added to it with the ARP Odyssey, available as part of the full Korg Collection bundle ($249) or on its own.

Really, the launch of ARP Odyssey (VST/AU/AAX/Standalone) came as no great surprise, given that Korg has already ‘done’ the Odyssey in software with the outstanding Odyssei for iOS and the Lexington module for the Gadget virtual studio.

Presumably built on the same code base as those, ARP Odyssey is an emulation of Revision 3 of the legendary synthesiser, unashamedly recreating and adding to its unusual control layout, and, most importantly, capturing that uniquely powerful, edgy sound with uncanny accuracy.

While the original ARP Odyssey was a two-oscillator synth limited to monophonic or duophonic play, and Korg’s reimagined hardware stuck to that same spec, all of the software versions are polyphonic, up to 16 voices in this case. Mono, Legato and Duophonic voicing options are also available, of course, as are up to 16 voices of detunable, spreadable unison stacking, although these ‘steal’ from the voice count, rather than maxing out at 256 voices in total.

Described literally, the architecture seems decidedly conventional. Two oscillators and a noise generator (pink or white) output your raw signals, which are shaped with separate low-pass and high-pass filters. Amp and filter modulation sources come in the form of an LFO and two envelopes (ADSR and AR), and the oscillators feature frequency, pulse-width and ring modulation, and sync.

It’s the way that it’s all brought together - and the fact that the rulebook for this kind of thing was still being written when it was originally conceived - that makes it so special, though.

Scrolling the main panel downwards reveals ARP Odyssey’s effects section, which houses six signal processors, each one adjusted using the same style of sliders as those festooning the synth.

The Distortion module features Valve, Soft Clip and Hard Clip modes, a Tone slider for tilting the frequency response, and a Mix slider for parallel processing. Even with the Drive all the way up, it’s not the most shredding distortion we’ve ever heard, but it’s great for rubbing a handful of grit into overly polite basses, leads and FX.

The two modulation-based effects - Phaser and Chorus/Flanger/Ensemble - make a fine fist of adding their various kinds of movement, width, depth and wobble to the sound. The Phaser’s Resonance parameter is a nice touch.

The three-band EQ is as basic as they come, but is certainly useful for quick frequency tweaks.

The Delay is similarly rudimentary, with separate left and right delay times (set synced or free, the latter on a 1-10 scale, rather than Hz, slightly unhelpfully), and adjustable feedback and output level.

Finally, the Reverb packs passable Hall, Room and Plate algorithms, plus the enigmatic but colourful Apollo, which doesn’t even get a mention in ARP Odyssey’s half-hearted manual.

For those unfamiliar with the layout, ARP Odyssey will be a little puzzling to navigate at first, but the quirks of its slider-based setup soon make sense. Oscillator waveforms, for example, are selected in the mixer rather than each oscillator section, and frequency modulation comes from a mix of two sources - sine or pulse LFO and S+H or ADSR envelope.

The S+H module also offers a variety of sources, two of which can be active at once, including oscillator outputs and noise. The aforementioned mixer sits alongside a modulation section, where sources and depth levels are set using sliders and switches. It might all seem charmingly old school, but the point is that the results achievable with this quirky machine end up being quite unlike anything you’d get out of any other synth. It’s just brilliant.

As well as the polyphony, other ‘new’ features added to ARP Odyssey include a bank of six onboard effects (see New tricks) and an arpeggiator. These all live in a panel over the main controls, accessed by scrolling your mousewheel and/or clicking the Full Size View button (top right).

The Arpeggiator/sequencer is a 16-step, slider- controlled affair geared for regular arpeggiation, note and chord sequencing (Semitone, Octave and Gate time), and modulation of up to three parameters from anywhere in the synth, including the effects. It’s powerful and fun to program.

Also note the three low-pass filter options, switching modelling between the VCFs from the Rev I, II and III versions of the hardware. All are capable of self-oscillation, but sound very different to each other, with I being the toughest, II the ‘fullest’ and III the darkest. And then there are the Rev1 and Rev2 preset folders, which contain skinned patches (white for Rev1, black and gold for Rev2) representing the two earlier editions of the hardware. Strange that you can’t switch skins without loading a preset, but no matter.

Our only major gripe with ARP Odyssey is that the GUI feels pretty cramped on a high-res display - it’s a shame Korg hasn’t taken the opportunity to switch to a scaling graphics engine for this and future releases. Don’t even get us started on the almost unusably small GUIs of MS-20 and Polysix...

Like its iOS and Gadget stablemates, ARP Odyssey sounds supremely authentic, with all the snarl, screech and mad, modulated attitude of the real thing. The effects and arpeggiator bring bags of new creative potential to the party, too, modernising and further animating one of the greatest synths ever made. Epic.