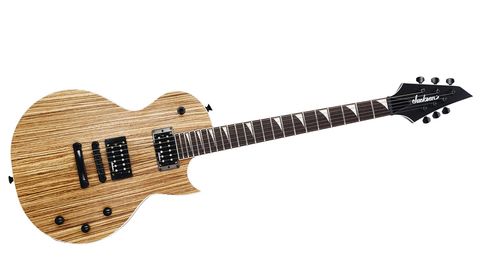 Shredders will love the thin neck and easy access to the upper frets.

On the face of it, the recently-reviewed double-cut, whammy-spec’d bolt-on Dinky DK2 and the single-cut, set-neck, hardtail Monarkh SCX in this review, appear to have little in common. Not so.

Aside from a snake-hipped neck profile both guitars are the result of Jackson moving away from traditional metal/shred body timbers.

Sourced from Indonesia and looking not too dissimilar to an ESP/LTD Eclipse, the single-cutaway 628mm (24.75-inch) scale Monarkh SCX is built around a mahogany back partnered with an arched zebrawood veneered top.

The glued-in maple neck is as slim as that of the DK2 and also features the same scarf joint and graphite strengthening rods. Here you get a rosewood ’board with the same compound radius for excellent playability across said ’board, a bunch of trademark ‘snowdrift’ inlays and 22 jumbo frets. The Monarkh’s body is only 37mm deep. This, along with some serious contouring at the neck/body join makes upper fret access a breeze.

The Monarkh comes fitted with 0.009-0.042 gauge strings. On the Gibson-like 628mm (24.75-inch) scale on the Monarkh, the bottom strings feel loose. If you’ve ever tried a Les Paul fitted with 0.009s you’ll know what we mean. You could move up a gauge, or two, but then you’re sort of defeating the point of the shred guitar setup.

That lack of focus in the Monarkh’s bottom end is even more apparent when you plug in. The twin pickups have all the grunt that the ‘High Output’ name suggests, with a definite bias towards  the midrange and high-end.

The bridge unit is best described as brash on clean settings although flicking to the middle and neck positions does add a little warmth. Unsurprisingly, this guitar prefers to shake its fist than whisper sweet nothings. Adding some filth reveals the bridge ’buckers’ true voice. It’s punchy enough to cut through a mix and there’s a decent amount of note separation.

If we learned anything from the explosion in guitar design in the 1980s it was that big frets on a flatter radius ’board equals happy days for choke-free string bending. What many of us also realised since the golden age of lollipop stick-necked metal machines is the amount of wood in your palm doesn’t necessarily impact on your fretting speed. Big necks can be just as fast. The super slim neck profile of the Monarkh SCX is an 80s throwback then, and the feature most likely to divide the opinion of potential investors. That’s just personal preference, of course. You’ll know which camp you’re happiest in.

What we can say with certainty is the Dinky DK2 is the pick of the litter here. Even though we were surprised to discover that you don’t get a gig bag for your 800-odd sheets, the body wood, scale length, direct mount Seymours, floating Floyd, compound radius and ultra-stable neck distinguish the DK2 as perfect a shred machine as you’ll find at any price. The Monarkh SCX? Not so much. It undoubtedly looks the part thanks to that zebrawood top but the thin neck feels awkward with the 628mm (24.75- inch) scale.