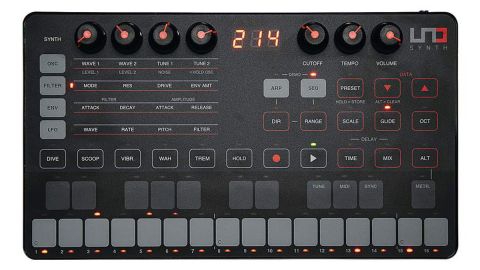 Despite some manufacturing compromises, UNO is a great-sounding source of analogue basses and leads at a bargain price.

With products ranging from mammoth ROMplers to analogue effect emulations, amp-sims, MIDI controllers, a huge array of iOS apps and accessories, and even a selfie stick, Italian brand IK Multimedia must be one of the most prolific outfits in hi-tech music making.

Until now, its range has leant toward the digital realm - but that changes with the arrival of UNO, its first analogue instrument. Fear not though, UNO doesn’t come totally without heritage; Italian synth brand Soundmachines and Alesis Andromeda designer Erik Norlander both had a hand in its creation.

The look of UNO may prove a bit divisive. Its slanted profile and push button control panel have a retro charm, but it’s a design that brings to mind the early days of home computers more than any vintage analogue synth. On unboxing UNO, the first thing that struck us was how lightweight and plasticky the instrument feels. In all honesty, the hardware feels a little cheap - no ‘luxury’ wood or metal, and the control panel relies heavily on basic-feeling push buttons with a single row of plastic rotaries for proper tactile control.

It would be easy to balk at this seeming lack of quality - particularly compared to similarly-priced synths like the MicroBrute or Monologue - but in the bigger picture, it’s not necessarily an issue. There’s a lot going on feature-wise, and clearly IK opted to save money on the hardware to keep the price down. We can live with that, but if you plan on traveling with UNO, consider a hard case.

Connection-wise, UNO has mono-summed mini-jack in and out ports on its rear. The lack of a proper, full-sized output is a shame, as there’s definitely space for one, but this is clearly another cost-saving issue. The audio input allows an external signal to be mixed with the synth and processed via the delay, although there’s no level control. Alongside the audio I/O, UNO has mini-jacks for MIDI in and out, with DIN adapters included. Finally, there’s also a mini-USB port for MIDI and power.

Users can select whether UNO is powered via USB connection or AA batteries. Under the hood, UNO features an all-analogue two-oscillator synth engine. Sound editing is handled by a neatly laid-out matrix which uses four buttons and four rotaries. Each VCO has a continuous waveshape control ranging from triangle through saw and square waves, with pulse width modulation introduced towards the right of the dial, ranging from 50% up to 98%.

As with quite a few features of UNO’s sound engine, pulse width modulation only has a limited level of front panel control but a number of deeper configuration options available via MIDI CC or IK’s free software editor. Each oscillator also gets a bi-directional tune control, which can be used to make fine detune adjustments and, at the extremes, adjust the oscillator tuning by semitone increments. These two oscillators are joined by a noise generator, with a second tier menu offering control over mixer level for all three sources.

UNO’s filter is a multimode 2-pole OTA design. Handily, filter cutoff is one of the few parameters with its own dedicated rotary, which sits along the top of the interface. The rest of the filter parameters are accessed via the matrix. Here we can control filter mode - switchable between low-, high- and band-pass - resonance, drive and envelope amount. The resonance doesn’t push into self-oscillation, but it is capable of some really aggressive rasps and squeals, and can add resonant bite without destroying the low end - great for acid-style basslines.

The drive control is a nice touch too, allowing for a little extra saturation and grit, although it doesn’t quite distort things as much as we’d like. The next two rows of the matrix are dedicated to modulation. There are envelopes for the filter and VCA as well as a single LFO, which can be routed to filter cutoff and oscillator pitch. The two envelopes are both four-stage, but only two of these can be controlled from the front panel - attack and decay in the case of the filter, attack and release for the VCA.

Full control of all envelope stages and extra LFO routing options are accessible via CC or the software editor. UNO also features an analogue delay. This is controlled using a pair of multi-function arrow buttons to set mix level and delay time. These controls are fairly slow to make parameter changes, although you can ‘jump’ through values by holding down either button. The delay has a fixed feedback amount too, locked in at a relatively restrained level.

As a result, the effect as a whole is more of a ‘set and leave’ tool, good for adding extra space and interest to your patches, but not that handy for on-the-fly tweaking. Also note that UNO’s output is summed to mono, so don’t expect any extra width from turning up the delay level. The lower part of the push button interface is taken up by a 27-note ‘keyboard’ for live playing, or to input notes for the onboard sequencer or arpeggiator.

Despite its rather basic look and feel, it isn’t too bad to play. There’s not a lot in the way of tactile feedback, but the ‘keys’ never feel cramped. The row of quick performance effects that sit above the keyboard are a nice touch too. These let the user add pitch dives and swoops, or vibrato, wah and tremolo, by holding down the corresponding button.

As well as its two-octave keyboard, UNO packs a multi-mode arpeggiator and 16-step sequencer. The arpeggiator has ten patterns, including a random mode and user-defined ‘as played’ mode. It has a four octave range too, and it’s easy to adjust the range and pattern while the arp is playing, for quick pattern variations. A keyboard hold button means it’s possible to trigger the arp and keep your hands free for making sound edits. The sequencer, meanwhile, can be programmed either on a step-by-step basis or by recording in real time. With record engaged, UNO can also record automation for all synth parameters, which considerably adds to the power of the sequencer. It also offers three directional modes, allowing the sequencer to run forwards, backwards or in a back-and-forth mode. It’s easy to program and edit, and makes for a decent tool for playing around with riffs and ideas.

UNO also features a scale mode for the keyboard, where the lower row of ‘keys’ can be set to one of 13 predefined scales - handy for experimenting with patterns without needing a working knowledge of music theory.

While UNO might look and feel rather ‘budget’, its sound is anything but. Although the synth engine is straightforward, there’s an impressive amount of flexibility and the resulting tone is characterful with plenty of analogue weight. The filter is a highlight - pleasantly raspy with the resonance cranked, but warm and smooth reined in. Paired with a square or saw wave, the result takes UNO into convincing 303 or SEM territory.

While neither filter drive or delay are the most wide-ranging, both do add polish and character. The flexibility of UNO is shown off well by the 100 presets. These are arranged in banks of 10, covering classic bass and lead sounds, arp-friendly plucks, drones and sound effects. Of these slots, the later 80 can be over-written.

As a package, UNO is impressive, with a few caveats. Even compared to other affordable instruments, UNO feels like a budget synth in hardware terms. Its control interface isn’t ideal either - the matrix layout is a neat way to organise the synth engine, and the keyboard and performance effects make UNO surprisingly nice to play, but the lack of dedicated rotaries, faders or switches makes it feel a bit awkward.

Quite a few parameters are inaccessible without an external MIDI input too.  On the sonic front, the place the UNO does show its budget roots - at least for our review unit - is the presence of an audible calibration noise, which leaks into the output whenever the synth engine is inactive. IK is aware of this issue with some production units, and has already tamed it substantially with a firmware update. We hope it can reduce it more in future, but the noise is low enough to mask.

Despite all of this, UNO is an excellent-sounding, versatile analogue monosynth, and you do get a lot for your money. The presets offer a ton of highly usable sounds, and we could certainly see this becoming a go-to instrument for classic basses and leads. The arp and sequencer are great for inspiring ideas too. At the time of writing the software editor is still forthcoming, but it promises to expand the capabilities significantly, with plugin functionality for full parameter recall within a DAW, alongside a standalone iOS version. Essentially, if you can cope with a few compromises, UNO is a great source of classic, punchy analogue sounds at a bargain price.