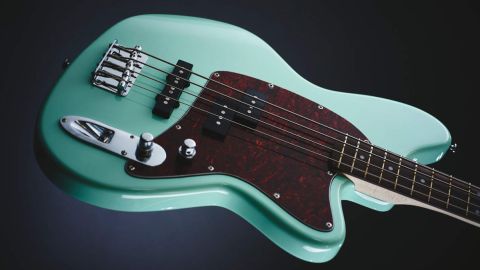 A lot of bass for your money.

For anyone new to the Talman design and styling, it’s a vintage design from the Ibanez stable - one which the company has obviously seen fit to reintroduce into its product range.

This is one of the cheaper instruments of the nine basses that make up this range, but as we’ve said before, don’t assume that a cheap bass won’t be up to much - sometimes they punch well above their weight. So if retro looks on a bass at a budget price interest you, read on!

Our first impressions are that this is a little similar to the Ibanez ATK models, albeit without the large chrome bridge plate and triple coil pickup, and in terms of feel and playability, the comparisons are valid. For the Talman model, all nine basses feature a neck-positioned split-coil pickup and either a single-coil pickup or a humbucker in the bridge position. This mint green model sports a rounded body styling with a front chamfer and rear contour to aid comfort and playability.

In our view, the rounded top horn could do with a slightly deeper cutaway to facilitate access to the upper frets, although the lower cutaway offers ample access. The three-ply tortoiseshell scratchplate contrasts very well with the mint green colouring, as does the dark rosewood fingerboard. The headstock styling is a little paddle-like, and there is some headstock bias both on and off a strap; nevertheless, it’s quite a pleasing bass to wear, with a substantial feel which will appeal to those players who like a bass with some substance.

The player-friendly gloss neck profile is a fairly standard, rounded affair; the setup is pleasing enough and with no sharp fret ends, the setup and level of finishing is reasonable. With a 19mm string spacing and 40mm nut width, there is much to like. However, the strings on this model were certainly past their best and the controls felt a little slack, as though the placement screws were simply loose, which is a problem easily rectified. The horizontal jack socket is a novel touch, while the rest of the chrome hardware operates well and performs as required. This is a simply constructed bass without too many frills - but its usefulness lies in its simplicity.

The 20-fret neck gives this bass a very comfortable vintage feel; getting used to it takes no time at all. The bass as a whole is very comfortable to play no matter what your preferred playing style is; slap, fingerstyle and pick playing all feel achievable.

Acoustically, the Talman has a fairly traditional sound, not overly lively - and the played-in strings don’t help to disguise that - but the neck has an even tonal response, and all four strings respond well across the neck. Plugging in, the bass has a warm rounded tone with the controls set flat, and panning between the pickups shows the familiar P/J tones we would expect from such a setup. The tonal extremes aren’t particularly noticeable, so bringing the bass and treble EQ into use adds some much-needed colour to the sound. With a pair of stacked controls (volume and pan on one stack, bass and treble on the other), the control setup is simple and obvious, so alterations to your tone can be quickly made with little effort.

Adding some bass EQ fattens the tone up no end, giving the overall tone some power and strength. The treble EQ has a clear ringing quality that opens the sound up in a pleasing way. Note definition and articulation are much improved once added, and for those wishing to employ some slap to their playing, the EQ options work very well and add a meaty thump with a clear bite in the upper register. Harmonics ring out clearly, and the initial note attack when using a pick stands out prominently.

There’s no doubting that the Talman is a fine, simple bass and should be judged on its own merits. There is nothing complicated about it and it performs very well for a bass in this price band; you could take this instrument to any number of gigging situations and be satisfied that it won’t let you down. It’s solidly constructed, performs very well and is comfortable to wear. As an alternative to Ibanez’s more familiar Soundgear (SR) range, this bass is a pleasant surprise in terms of what it can offer. Check one out!