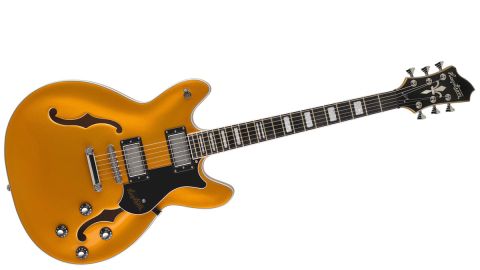 For function band guitarists looking to cover all the bases and make a visual splash, this might just be the semi-hollow to beat.

Dating back to 1965, the Viking is one of Swedish guitar co Hagstrom’s longest-running models, and the company’s first semi-acoustic design.

It’s been available in a variety of guises over the years - including 12-string and baritone incarnations - but now Paramore touring guitarist Justin York (the brother of longtime Paramore man Taylor) has moulded the Viking into its most practical and gorgeous form yet.

Given Paramore’s metamorphosis from pop-punk wunderkinds to alt-pop earworm mavens, their material covers a huge amount of tonal ground and, accordingly, Justin has equipped a pair of coil-splits on the model’s two tone knobs, plus a custom tone circuit, which cuts bass rather than treble for more vintage bite - a similar concept to Reverend’s bass contour or the Dry Switch on Yamaha’s Revstar range.

In practice, it results in an initially daunting range of tones, but this is one semi that can handle just about anything you can throw at it. There’s a fat, enveloping jazz voice on the neck humbucker, and killer mid-output blues solos on tap with the bridge. Wind in the bass-cut for instant jangle across all positions, and split the coils for lower-output options.

Sure, nobody’s going to mistake that split tone for a Strat, but it certainly adds a welcome glassier texture, and while you’re unlikely to employ the bass-cut in split mode, the helps to approximate thinner, pawn-shop-style tones, and also prevents distorted sounds from becoming too woofy.

Many dual-humbucker players will relate to the conundrum of setting your amp for the bridge humbucker, only to switch to an overly dark neck tone - there are no such problems here: wind the bass-cut back, and you’ll have a brighter, almost P-90-ish tonality instead. It handles gain like a champ, too - anthemic Foo Fighters progressions sound punchy and airy, as you’d hope.

The guitar’s shallow D-shape neck makes a good all-purpose option for extended playing, and bar a little fret buzz at the 2nd fret, the fit and finish of our review model was spot-on - that Resinator fingerboard feels just like ebony under the fingers.

If we had to criticise anything, it would be the cheap-looking plastic knobs and the lack of a gigbag, but it’s hard to think of a more versatile semi-hollow - it’ll do your typical Noel, Berry, BB business, and a hell of a lot more besides.