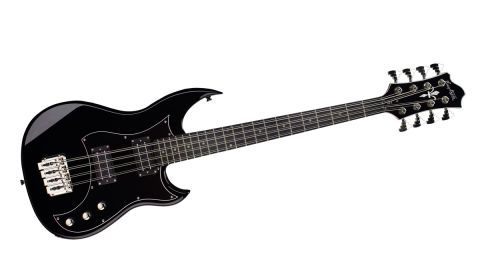 A fantastic way into the eight-string world.

If, like us, you sometimes feel that even four strings is far too many to bother with and that you could do your job pretty well with three or fewer, then the thought of an eight-string bass probably makes you want to hide under the duvet.

But have no fear; the Swedish luthier Hagstrom is back with a classic, eminently playable eight that (in theory) should break neither the bank nor your fingers. Jimi Hendrix and Noel Redding played these basses in the 60s, which makes a review essential in our book.

The Hagstrom HB-8 may look like a bit of a monster, with far too many strangely jagged tuners for comfort and that massive headstock, but in fact tuning the thing is easy and fast. The 17:1-ratio machine heads work quickly and accurately, and the process is made much easier by the super-clear, super-glassy tone of the bass.

We tuned the thinner string in each pair in unison with its partner, but you could, of course, attempt alternate tunings such as the late Chris Squire’s preferred eE-aA-aD-dG for open fifths at the top end. Structurally, the bass is familiar - with a four-bolt bolt-on maple neck with 21 frets and a mahogany body - but there’s tons of added value in the bridge, a tank-like structure, as indeed it needs to be with this much string tension to deal with.

Through-body stringing helps to make the bass feel indestructibly solid, and the fretboard - made of Resinator, or synthetic ebony in old money – is satisfyingly tough to the touch. We couldn’t find any obvious assembly flaws, which for a bass costing £769 is what you’d reasonably expect.

The HB-8’s tone is just beautiful. Bell-like, harp-like, all those adjectives which sound like The Lord Of The Rings apply here. Yes, some of that is simply due to the fact that there are twice as many strings as usual, but the through-body setup, chunky bridge and heavy body all contribute too.

Low notes sound extra doomy; high ones have an almost sitar-like quality. Chords sound amazing, of course; strum slowly for the full John Paul Jones effect, or at least your best attempt at one. Obviously there’s a built-in octave effect thanks to the doubled strings, which you can exploit in various ways.

And this is before we even get serious with the electronics. There’s only a single tone control but that’s more than enough, thanks to the six-mode rotary selector like the similar control on an Aria SB1000.

The output from the two Dyna Rail alnico pickups can be tweaked so that they function as humbuckers or single-coils, together or separately. That’s enough range for any bass, even this proudly passive instrument, with a variety of clang and sizzle at high-mid and top frequencies. Massive low end isn’t this bass’s forte, but you probably wouldn’t go to an eight-string if that was what you were after anyway.

Playability? Apart from the obvious extra effort and care you need to put in if you want to hit all the strings consistently, the HB-8 is a piece of cake to navigate. The 30.75” scale might not be for everyone, but it certainly helps when you’re skipping across string courses, assisted by a sympathetic action height.

The super-hard fingerboard composite pushes back against the strings nicely, a welcome touch with all that metallic mass to deal with. Fingerstyle is totally doable, as long as you don’t agonise too much about the almost guaranteed missed string here and there: for consistency, apply a medium to thick plectrum.

Slapping and tapping are manageable if you have at least reasonable finger strength, but neither are what this bass was designed to do, so don’t come looking for Marcus Miller-style fireworks. Instead, bring a disciplined, focused picking technique to this instrument and you’ll bring out its absolute best - a ringing, plangent tone with sustain for days.

The HB-8 is great value for money at £769; we can’t say enough about its tone range, physical feel or that bridge. It has that distinctive eight-string tone, of course, so you might want to think twice before you use it in your reggae or Motown covers band. If you’re looking for an entry point to this sound, though, we recommend the HB-8 whole-heartedly.