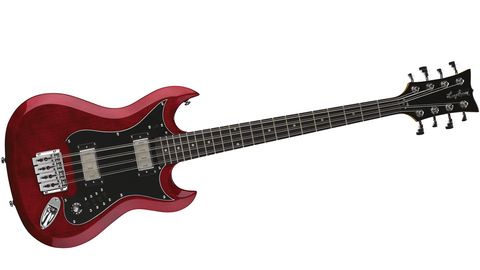 Old-school and proud, this tasty eight fills a certain niche with aplomb.

A little while back we reviewed Hagstrom’s HB-8 bass, structurally very similar to the H8-II we’re road-testing here, but £90 cheaper and much simpler in its control layout.

You would be forgiven for assuming that the British bass guitar market might not be robust enough to support not one but two of these Swedish-designed, China-assembled eight-strings, but apparently we like the configuration a lot, so here we are. Of course, the instruments’ heritage helps; apparently Jimi Hendrix and his bassist Noel Redding both used them, notably on ‘Spanish Castle Magic’ from Axis: Bold as Love in 1967. We loved the HB-8; how does its more expensive sibling stand up?

This bass is physically gorgeous; you find yourself spending ages admiring the thing before you even plug in. The finish on the maple neck and the mahogany body feels flawless, and there’s a solidity to the instrument that can’t be faked, thanks to the massive headstock, through-body stringing and a truss rod called an H-Expander, which sounds pretty tough (even if we don’t know what it does).

The styling is, of course, dedicated to a decades-old aesthetic, so you’d better be into your Austin Powers-style nostalgic tropes if you’re to enjoy the Hagstrom fully. The neck is a four-bolt bolt-on, the two humbuckers are miles apart - tone ends will approve - and the input is a retro angled affair rather than a pain-in-the-neck perpendicular job.

The little touches of class and comfort are all there; note that the front strap button is located beneath the top horn, rather than behind it, so your kipper tie doesn’t get scratched, and that the tuners rotate at different ratios depending on whether they turn the main or octave strings.

A quick neck check reveals a traditional gloss finish, but it’s not too sticky to navigate, fronted with a synthetic Resinator fingerboard (they had more rainforests back in ’67, evidently). The bridge looks and feels muscular, as indeed it needs to be to handle this much metal mass through the body. All good so far...

Are you the kind of bassist who would use an octaver and never, ever turn it off? Then this bass is for you. Short of deliberately picking one of each pair of strings, there is no way of not having each picked note accompanied by a second note in unison; if you don’t like that idea, look elsewhere.

If you’re into this sound, though, you’ll be in Hagstrom heaven. Clear, bell-like, ringing... all of our favourite adjectives apply in spades here. For some reason we found ourselves playing ‘Peter Gunn’ and the Wonder Woman theme over and over again; there’s something about that echoey, resonant style that sits nicely with the tone and feel of the H8-II.

The two DynaRail humbuckers, equipped with a coil-split function activated via the push/pull volume pot, put out a thunderous, resonant tone, especially if you dig in with a pick. Yes, you can slap, and even tap... but why would you?

Now to the sole bugbear of this instrument: its control layout. The master volume pot does its job, but the four switches require a lot of serious attention and might be a challenge to a hungover bassist. The first two are neck and pickup on-off switches; in other words, turn them both off and you’ll get silence.

Er... assuming you don’t make that error on a pitch-black stage and don’t spend ages trying to make the bass work, you’re still left with two switches where a single one, or a blend pot, would have done the same job much more easily. The third switch (off/mid cut/high cut) and the fourth one (gain/high cut) do their jobs, for sure, but seem unnecessarily complex. Perhaps we’re being thick, but less has to be more in today’s attention-span-deficit world, and in this case, more seems to be very much more.

Just to make things even more complicated, there’s a killswitch on the upper bout. Now that’s really going to mess things up when (not if) your drunk roadie drops the bass, your toddler climbs all over it or an audience member leaps on stage for a cuddle.

Enough of that. In terms of playability, this bass has it all. The 40mm nut width is friendly and takes into account the unnerving number of strings. The action is excellent, and because it’s paired with a weeny 30.75” scale, you’ll be running around the fingerboard with the greatest of ease.

Legato playing is tempting, although the increased string mass means your fretting hand has to work hard - and of course, playing strings as narrow as .015 may require something of a learning curve. Still, dig in, don’t worry about it too much and allow yourself to enjoy all that reverberating twang. This is supposed to be fun, after all.

What a beauty, despite being awed very slightly in our book by the over-complex controls and the mind-boggling number of ways to ruin your gig by accidentally turning the bass off. Still, maybe that was how things got done 50 years ago, and you can’t argue with the tones, build quality or playability. Retro freaks, do not hesitate!