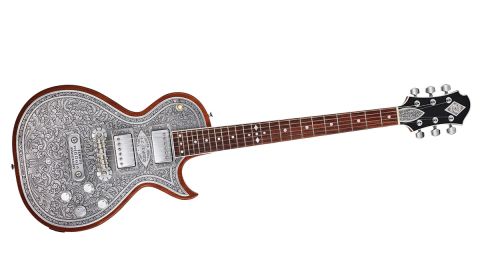 This guitar is a serious investment, but if you've always hankered after a Z, these modern versions are the only way you'll get one.

The current Zemaitis catalogue boasts a huge collection of Z-style guitars, from the Custom Shop Metal and Pearl Front models through to the Superior models with their large-block pearl inlays.

Below these all-Japanese-made models are the Korean Casimere models in Metal Front and Superior style, and below those are the more generic Z models (not currently available in the UK).

It's fitting that the 60th Anniversary models, in both the Custom Shop and Antanus ranges, are Metal Fronts. In a series of letters to this writer back in the 90s, Tony said: "My metal-front guitars started as a 'chassis' to experiment with and my friend of 30 years [Danny O'Brien] suggested it ought to be engraved. Prior to that, Eric Clapton asked if I would make a silver acoustic guitar - hence Ron Wood's [guitar] fronts used to be polished silver with silver inlays! Very pricey - and alloys do the job just as well and don't go green."

The 'alloy' to which Tony refers is aluminium, or rather the harder aluminium alloy, duralumin, which is not only used for the 1.5mm-thick front but also the 'Z' headstock badge, truss-rod cover, pickup rings, bridge and tailpiece. And although the intricate leaf engraving bears the name 'Danny OBrien' (sic), Danny O'Brien himself "designs the unique and beautiful engravings... the work is then completed by hand by our team of shotgun engravers, schooled in the same techniques as Danny," says the new company.

While the engraving, not to mention the actual metal work, certainly captures the Z vibe, it's more refined, lacking that almost homemade or at least very handmade style of the original guitars - which is observation, not criticism.

There's little to see of the aforementioned "hybrid" design; 'inspired by' would be a better phrase, as there's no disguising the tighter-waisted single-cut outline with its sharply pointed horn and 635mm (25-inch) scale length, as used by Danelectro and PRS.

It's a slab-style design with no contouring, just a light curving to the back of the horn and a similar shaping on the back of the headstock. The body, at least, follows Tony's original construction methodology, up to a point. Approximately 42mm in depth,it uses a three-piece spread of African mahogany. Zemaitis would have applied a light arching to the face to reduce onstage light reflection; here, though, the top is dead flat.

The neck is less Z-style - a one-piece as opposed to three-piece construction with a standard truss-rod adjustment just behind the nut, which you'd never see on an original Zemaitis guitar. The adjustment point would sit further up the headstock, hence the elongated truss-rod cover.

But we still have plenty of Tony's style intact, from the elegant and distinct back- angled headstock with its white binding and black-faced front (a paint, not ebony), through to the hardware, which was originally made for the more upmarket guitars by Tony himself. The bridge is especially distinctive - like an oversized tune-o-matic - with its large thumb-wheel adjustors, although the saddles here are chromed metal, not aluminium, and like the engraving, it's much more precisely made.

The neck joint is more typical Zemaitis. Like a Telecaster, the full-width neck fits into the body with no additional heel, but it's glued-in; Tony never made a bolt-on guitar. You will see quite a steeply back-angled neck pitch, not least due to the relatively high bridge, which at its centre sits some 18mm from the metal face, more like a Les Paul Junior than a Telecaster.

With a slightly open-pore, organic feel to the thin satin finish, the neck is a beautiful handful, slightly more 'D' than 'C' with
a noticeable shoulder but nice taper, so the upper fret positions feel more meaty. There's plenty of height to the fretwire, more jumbo-like than the width suggests.

There's a very nice ring and resonance here, too, although plugged in after our reference PRS Singlecut, there are less highs and a rounder tonality - as you'd expect from an all-mahogany guitar. It's very simple in use, with a classic Gibson-style array.

The bridge pickup certainly has plenty of clout in a Seymour Duncan JB sort of fashion; the neck is more vintage-y and set some way from the strings, resulting in a more demure tonality, but it proves easy to balance. Also, adding a taper towards the treble strings gives a little more cut.

It performs best with some dirt dialled in, especially of the Marshall variety, where that upper midrange focus seems a perfect foil for the meaty lower midrange. Through a cleaner Fender, it sounds a little too rounded... until we kick in a gain boost. The controls are nicely damped with a good taper, too. It's perfect for Stones-y bump 'n' grind, and loves volume and classic rather than over-saturated gain.

It started out as a device to screen the electronics, but the metal front turned into one of the most identifiable features of any independent guitar maker. This Metal Front is pure Tony Zemaitis DNA and when you pull it out, everyone wants to see it. It's well made with a good weight, beautiful strapped-on feel and hugely rock-centric playability and sounds.