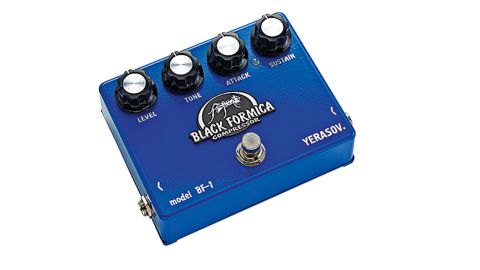 Workmanlike compression for a variety of tasks.

Something may have been lost in translation when naming Russian-makers Yerasov's Black Formica, as it's actually blue, and we wonder if the designers are aware that Formica is more commonly known here as a decorative laminate rather than a species of ant.

We digress. The Black Formica is a four-knob compressor based around a high-quality VCA made by that corporation, and it is capable of some pretty strong compression.

Juxtaposition of the attack and sustain knobs is the key: between the two, it's possible to vary the amount of squash, from getting the dynamics a little tighter and evening out chords to a squishy effect, and settings that will eke out sustain.

The tone knob is effective for replacing top end lost through compression, or just offering a brighter sound when the pedal is engaged.

Its name might suggest something you'd find in a goth's kitchen, but this is a useful compressor for keeping your signal consistent and adding sustain.