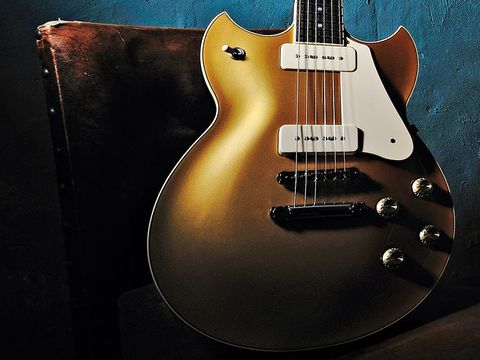 Importantly, each is quite specifically aimed at a type of player and Yamaha is unofficially referring to the 1802 as the SG Vintage.

Construction-wise, all of the 1800 series are identical, Yamaha opting for a more traditional build style, with not a through-neck in sight. Instead, the trio uses more conventional glued-in mahogany necks with a classic combination of mahogany body topped by a new, deeper carved maple top.

Despite the apparent similarities, each 1800 model differs greatly in look, feel and vibe - and that's before we plug 'em in.

The SG1802 is certainly the most vintage-y offering, and with its twinkling gold top finish, teardrop pickguard and high-output Seymour Duncan P-90-style single-coils, it certainly references the look of Gibson's famous Kalamazoo single-cutaway.

Alongside this, the 1800's neck profile follows that of a late fifties Gibson profile - it's chunky in the palm without being over clubby and slims marginally towards the first few frets. Coupled with large, highly polished frets and a flatter-than-Gibson fingerboard radius, the premium rosewood fingerboard makes for a super slick playing surface.

But, as we said, all three 1800 models feel slightly different: this 1802 feels lighter and more delicate compared to the 1820 and 1820A, which both have a tighter, gutsier feel. It's subtle, but noticeable.

Moving up the neck, Yamaha has trimmed down its SG headstock shape and this1802 features the classic Yamaha SG flowery inlay on the headstock face.

Somewhat remarkably, each of the 1800 trio comes in at 4kg (8.8lb) on the scales, not an ounce between them (how's that for consistency?), hardly surprising for a guitar with a max body depth of 56mm. It's on the weighty side for sure, but we've played many heavier Les Pauls over the years.

Strapped on, the heel positioning of the forward strap button does induce some forward lean on a strap; however, those used to Gibson- style double-cuts will feel right at home here.

As with all the 1800s the 1802 also employs Yamaha's IRA (Initial Response Acceleration), a method of 'playing in' the guitars by "applying specific vibrations to the completed guitars," says Yamaha. "It also shortens the time needed for the guitar to adapt to your playing style and it delivers excellent sustain."

It's immediately clear that the SG1802 possesses the most acoustic 'brang' of the 1800 series - like we said, this one feels a little more delicate and more resonant than its two counterparts.

Thinking clean and plugged in to a vintage Marshall-style amp, the SG1802 has bags of the character and zest. The bridge selection has immediacy in its response and attack, with the Seymour Duncan soapbars doing a marvellous job of transforming the body's density into a sparkling, clean tone with plenty of snap - more along the lines of a massive sounding Gibson SG Special.

Of the trio of 1800s we'd sway toward either the 1802 or 1820 for classic clean-to-mild-drive sounds. Adding more gain really gives the 1802 its rhythmic voice. The bridge selection sings in true power single-coil fashion, though here we have a relatively low-noise operation paired with a percussive and brassy mid-range able to take on My Generation-style strums with relative ease. Neck and middle selections offer up a breathy palette of blues or Winehouse-style soul tones that maintain a more modern vibe overall.

Alongside this, the 1800 series will only be available in limited quantities due to their hand-crafted construction, so you might have to be quick if you want to track one down.

All three SG1800s offer a very viable alternative to the likes of the Les Paul, and with their extensive high-end spec, bullish looks and beautiful finishing they're sure to offer a match to any Gibson in terms of construction and style. Of course, thanks to the Les Paul's undeniable heritage, not everyone will see these SGs as being quite so classic. But compared to its two companions, in terms of versatility and character, the SG1802 wins our vote with its charming feel, range of tones and vintage-chic goldtop finish.