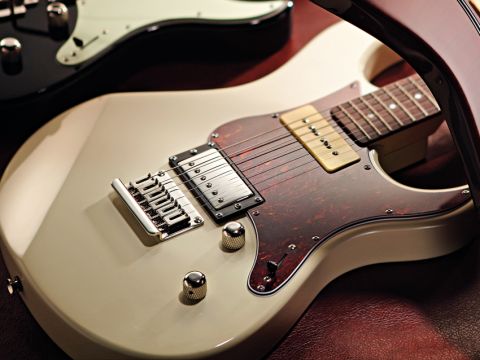 Proof that you don't need to spend a small fortune to own a guitar that plays like a dream and sounds pretty good too - the very essence of Yamaha's Pacifica concept.

This new model is the result of more than a year's worth of planning, refining and testing and is based on two Custom Shop prototypes.

Driving the concept of revisiting the range of mid- priced Pacificas were Yamaha's Mark Kirkland and Julian Ward, and the latter takes up the story.

The model has a solid alder body that's the same dimensions as the bread-and-butter Pacifica 112, and the spec also includes Grover locking tuners and Graph Tech Black Tusq nuts.

"We decided on a two-pickup design to suit bluesier players primarily, and we chose a P-90 for the neck position," confirms Ward. "An under-used pickup, in our minds at least, the P-90 seems to be the one everyone loves, but almost nobody has… especially on a non-Les Paul-style guitar."

The 311 is a more affordable version of the 611HFM's design, with its unfinished neck and headstock mirroring the stage-ready vibe of the 112, and the spec includes Yamaha's own custom-wound versions of both a hot-yet-vintage-voiced humbucker, complete with coil-split, and a P-90.

The alder body is fashioned from a five-piece spread, and the vintage white finish of our example looks the business in tandem with the tortoiseshell pickguard.

The feel of the 311's neck is, to us, slightly different. It's certainly rounded at the edges, and the unfinished version feels simply fantastic.

Plugging the guitar in, it's immediately apparent just how versatile the Pacifica design is. The 311 isn't quite as tonally articulate as the 611 - the humbucker is lower in power and the P-90 a little flat. However, as a standalone instrument it provides a good level of versatility.

In fact, its humbucker is, if anything, better suited to giving warm, Gibson-style tones and, with a moderate gain setting, the reduced amount of bite from the guitar allows for a reasonable impression of Warren Haynes's fat sound, albeit with a more transparent edge.

We love the feel of the 311, and it plays very well indeed.

Yamaha's Pacificas have always ticked the value box, but this guitar adds an air of something more unique and desirable in the classic rock and blues cool of the 311: a good idea, well executed. Give it a go and see if there's a budget boutique choice here for you.