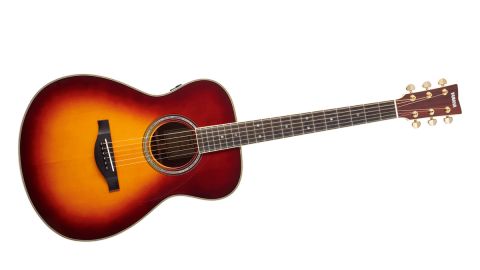 Bags of fun and with a definite practical edge, too. Seriously, try one.

The acoustic guitar world has witnessed many innovations over the years in terms of pickup design and amplification.

Once upon a time we put our faith in stick-on transducers, gaffer tape and lucky heather in order to transmit our fingerstyle fancies to an audience.

But the world is a rapidly changing place and innovation has not left the humble acoustic untouched. Yamaha has always been one of the front runners as far as advancing the art is concerned and its latest contribution to the bold strummers society allows you to play completely unplugged but with the enhancing properties of chorus and reverb mysteriously appearing from out of the soundhole.

No, we haven't lost our marbles: reverb and chorus with no amplification or outboard gear at all. Fascinated? So are we...

But before we get to the clever bit, we'd better just consider the guitar that's hosting all this wizardry. Basically, the LS-TA is what Yamaha call its 'Original Jumbo' body size, which, as the pictures reveal, is slightly less bulbous and more in proportion than jumbos offered by many other companies.

The top is Englemann spruce, which has undergone Yamaha's ARE treatment to give an aged and 'played in' sound to the timber, with back and sides made from rosewood. The neck is a five-way laminate of mahogany and rosewood and the fingerboard is ebony.

There are 20 well-seated and nicely finished frets, plus a bridge saddle and nut made from urea at either end of the guitar's scale length. There's an attractive but understated rosette around the guitar's soundhole, made from alternating circles of black and white with a centre ring of abalone.

A transparent scratchplate doesn't interrupt the Brown Sunburst finish to the body - and if sunburst isn't to your taste, the guitar is available in a more standard Vintage Tint as well. Everything looks to be well up to Yamaha's renowned level of build quality.

So, the guitar itself is just the ticket for anyone looking for a home-based strummer or even a gig-friendly companion. In terms of how it sounds without the enhancements engaged, there's a fullness to the acoustic sound with a good balance between lows, mids and highs.

The ARE treatment has definitely given a the impression that there are already some miles on the clock in terms of the tone having settled from puppy-like energetic brightness to a more sedate maturity and richness.

In other words, here's an instrument that practically anyone would enjoy playing, irrespective of stylistic preference. But that's really not what we're here to find out; let's turn our attention to the remarkable innovation that lurks within the belly of the beast...

The science behind it sounds deceptively simple but involves some befuddlingly clever electronics. According to Yamaha, it all goes something like this: "An actuator installed on the inner surface of the guitar back vibrates in response to the vibrations of the strings. The vibrations of the actuator are then conveyed to the body of the guitar and to the air in and around the body, generating authentic reverb and chorus sounds from inside the body."

The three low-profile rotaries that control the reverb, chorus and (plugged in) volume are mounted on the guitar's upper bout. From a player's perspective, the left-hand control oversees the amount and type of reverb present in the guitar's sound.

At the 12 o'clock position it switches from 'room' to 'hall' - terms familiar to anyone who has dallied with reverb pedals in the past. The centre rotary switches the internal effects on and, when plugged through an amp, acts as a level control.

As you might have guessed, the other remaining control affects the intensity of the chorus. Power comes from a battery compartment down by the output jack/strap pin at the guitar's base.

So, what's it like? Well, it's difficult to sum up. We're all well acquainted with chorus and reverb, but we're probably more used to them as outboard effects and not something that appears magically from within an acoustic guitar.

With the balance between chorus and reverb just right, the sound attains a third dimension that would definitely enhance a living room performance or writing session. The effects themselves might not be studio standard, but they're both good enough to give the guitar a professionally produced ambiance.

The level of ingenuity here is absolutely staggering. Everyone in our office who has played the guitar has come away with a grin on their face - and surely that's the point?