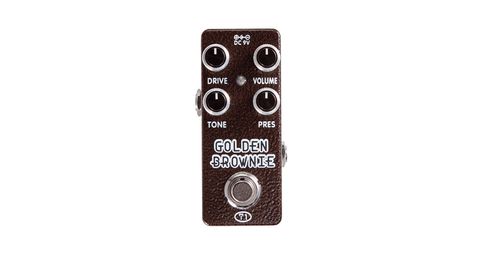 You'll have no trouble finding a screaming lead tone for rock and metal here.

Xvive has a range of US-designed/ Chinese-built pedals that includes the Analog series Micro pedals, two of which have been designed in conjunction with German guitarist Thomas Blug, he of the BluGuitar AMP1.

Designed to deliver 1980s style high-gain hard rock tones, the Golden Brownie is described by Xvive as a "Marshall JCM800 in a box", and there's definitely a Brit valve flavour there, from mild breakup through to a full-on distortion and all points in between.

Key to the tone are the two EQ knobs, Tone and Presence, which complement each other. They seem to be cutting or boosting the upper frequencies in slightly different ranges to dial in a sweet spot with the correct amount of brightness.

This pedal will save valuable real estate on your 'board, while also providing plenty of rich distortion with loads of sustain for pinched harmonics, legato playing and EVH-style tapping, if that's your thing.