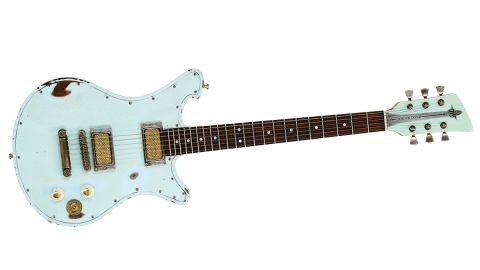 The IronTop has a strong personality that's also full of subtlety. A brand to watch, we'd say.

Wild Custom was founded by Julien Joseph Roure who, after a decade and a half as a cabinet-maker, started making guitars in 2008 in Creuzier- le-Vieux, a town in central France - the first design being the WildOne.

On review, we have an example of a typical custom-spec model, in the form of an IronTop that's been convincingly aged.

You can personalise your guitar with various parts - not least a 'Fuck-Off '(!) toggle-switch ring - or, of course, a full custom build, which means you can spec anything: scale length, wood, hardware, pickups, wiring, control plates and much more, based any on these base models or something totally unique.

The flat 'slab' body of both guitars' WildOne outline has an original shape and headstock that reminds you a bit of Rickenbacker's 'cresting wave' outline and a little bit of Gibson's Junior/Special, but creates what is now a signature shape of Wild Custom.

The IronTop's is a maple bolt-on. There's also a rosewood fretboard, featuring tidily fitted frets and a medium C 'standard thin' profile that's pretty Gibson-esque and mainstream. There's plenty of Gibson influence, from the scale length, the fingerboard camber, and not least the tune-o-matic and stud tailpiece setup.

On the IronTop, we get a pair of humbucking-sized Gold Foils by the UK-based Mojo Pickups.

The neck offers a full-bodied depth, with a distinctive woody character. It's not as creamy as some, but with plenty of mids and a slightly tight low end. The mix position is nicely balanced, with added definition and there's plenty of bark and bite from the bridge.

Nice sustain, plenty of harmonic resonance and a soupçon of crystalline modern brightness - superb with any arpeggios. But you won't unleash the beast until you push the overdrive switch on your amp, which creates a perfect classic bite for a wide rock repertoire going from blues to classic and harder stoner rock.

There's an additional openness here to the sound, the construction seemingly bringing more resonance, bite and even sustain to the sound. There's twang and enhanced high end that gives more subtlety as well as a really nice Fender-y 'snap'.

Gold Foils may be the pickup of the moment - and their relatively low output, clean-but-not-thin tonality works very well for modern country or edgier blues.

Certainly, with gain, the IronTop's sound is trashy, though with surprising fullness. There's also a surprising precision or clarity, and even playing heavily distorted chords still allows you to hear each string with good presence. Not for everyone, perhaps, but in this setting these Gold Foils work extremely well.