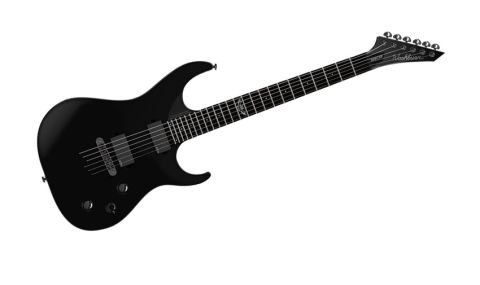 A bit of playing in is sure to ease this axe into its natural role as a true speed machine.

With the company itself branding the Parallaxe "the perfect shred machine", it's clear that Washburn is making no bones about the intentions behind it's new range of metal guitars. Here we check out a real speed machine, the PXS10EC.

Suffice to say, if you're more interested in your open-position chords than Mixolydian face-melting at 190bpm, you'd better look away now. Such bold claims may seem audacious, but a quick glance at Washburn's artist roster confirms the company's supreme shredentials, with the likes of Nuno Bettencourt, Dimebag Darrell and Jennifer Batten all brandishing Washburns over the years.

The spec lists support Washburn's ambition, too. For starters, all the models in the series - whether single-cuts, double-cuts, seven- or eight-strings - are loaded with passive Seymour Duncan or active EMG pickups, while the hardware bears similarly impressive names.

Across the range, you get Grover machineheads for precise and stable tuning; the Buzz Feiten Tuning System for improved intonation across the neck; and extended cutaways, whether that's via Washburn's full-access neck joint or Stephen's Extended Cutaway. That means unprecedented access to the widdly end of the fingerboard, without scaring your audience away with poor intonation.

The first thing you notice about the PXS10EC is that cutaway. Yep, if your axe has a Stephen's Extended Cutaway, you're certainly going to know about it. That patent number-adorned wedge is hardly understated.

So what gives? Well, essentially, the SEC is a kind of 'pocket' under the heel end of the neck that allows your palm and thumb to rest comfortably, just as they would at the bottom of the neck. It might look obnoxious, but the upshot of having an SEC is ludicrously comfortable guitar playing right across the fingerboard, and nothing can match it for upper-fret shredding.

Elsewhere, Washburn has employed a classic EMG 85/81 humbucker combo, which brings the pain like nothing else for heavier guitar styles, although again, clean tones are not this axe's forte. But we're not here for country ballads; this is about speed, and subtlety is not in the Parallaxe lexicon.

The guitar's hardware does its best to keep things moving along, too: the Grover locking tuners make switching out those burned-through strings a breeze after a high-speed workout, while the tune-o-matic string-through bridge ups the sustain for long, wailing bends.

However, although the guitar's Black Matt finish looks and feels gorgeous, its presence on the back of the neck can obstruct quick slides up and down the fingerboard in the heat of the moment. Still, a bit of playing in is sure to ease this axe into its natural role as a true speed machine.