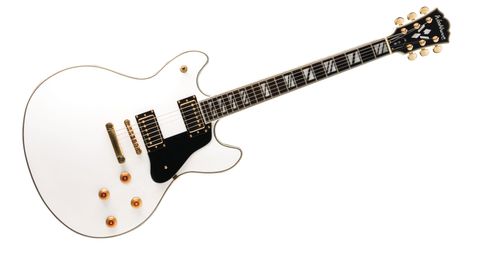 There's stiff competition from Epiphone and Hagstrom in this price range, but the Washburn's stage-readiness, convincing tones and smooth looks make it a whole lot of guitar for the money.

Maybe Washburn isn't the first name that springs to mind when researching semi-hollow guitars - you're more likely to think of a lion-maned speed demon ripping on an Idol or Parallaxe than the contemplative jazzer noodling on an f-holed double-cut. Yet the company has an extensive line in airy guitars, and the HB45 is its latest offering.

But where the f are the f-holes? Panic not: this isn't the first time a semi-hollow has been without 'em - just look at Gibson's recent ES-335 Studio.

There's method behind the madness: getting rid of the holes not only accentuates the HB45's clean lines, it reduces feedback. That's in addition to the centre-block in the middle of the guitar's laminate maple body, which also helps to stifle howls, while enhancing sustain.

This guitar is a looker, all right: while white and gold can so easily fall on the wrong side of tacky, the black scratchplate, double binding and aged bronze knobs keep it in check.

Aside from the odd finish imperfection on the binding, there isn't much wrong with the construction, either, although we did hear something rattling inside the body - but with no control cavity, taking a look means removing a pickup, which you wouldn't want to do in a hurry.

The HB45's slim body depth and lack of f-holes means it lacks the unplugged projection of an ES-335, but it does retain the centre-blocked body weight and sustain. And plugged in, this guitar nails the semi-hollow sound, with a resonant depth and rounded, mellow edge.

The toasty neck pickup is perfect for clean jazz comping, smooth octaves and lead lines, but switch over to the bridge, and you get a ballsy, mid-heavy punch that still retains plenty of the guitar's character. Bluesy rhythm and leads sound pleasingly authentic - think Cream-era Clapton and AC/DC open chords, and you won't be far off.

Kick in the overdrive, and you soon understand why players such as Dave Grohl and Tom DeLonge have turned to semi-hollows for their rock kicks.

If you find most solidbodies a little too precise and aggressive, the woodier character of the HB45 will suit you well - upper-fret licks are accompanied by a halo of ringing overtones, while there's huge sustain with barre chords. Feed it to tons of gain and the HB45 will still feed back, but in a musical way.

If you haven't experimented with semi-hollows before, the HB45 is a fine place to start.