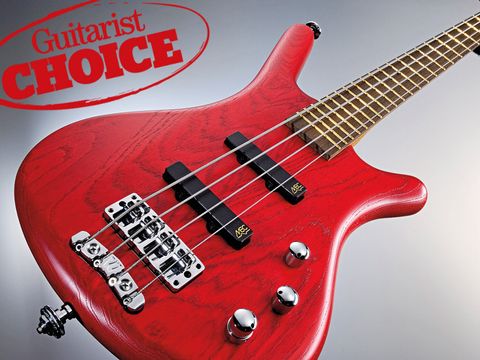 The move in production has kept one of Warwick's best-selling basses competitive. This remains a very versatile, good sounding and affordable pro-spec bass.

When Warwick introduced the Corvette bass in 1995 it caused quite a stir. With its diminutive body, full-scale neck and distinctive and somewhat tubular upper body horn, it was certainly unlike anything we'd seen before.

Since then it's become a firm favourite with bass players of all musical persuasions. However, the recent and ongoing economic problems meant building these basses in Germany became far too expensive, so the decision was taken to use all the same materials and components, but switch the production to Korea where costs are less.

So, enter the Pro Series to ensure that the Corvette is still available, still built to same standards we expect from Warwick and still at the 'right' price.

With any bass built by Warwick we've come to expect a choice of pickups, woods, fretted or fretless and four, five or six-string configurations. In fact the range of Warwick options is staggering, and via the Custom Shop you can spec your own model entirely.

Here, however we have a standard Corvette, fretted, with a swamp ash body, ovangkol neck and wenge fingerboard, with MEC electronics that include a pair of active J-style pickups and active circuitry.

All but the volume control feature a centre detent on the knob, so cutting or boosting the tones is very straightforward. The standard fittings are chrome-plated and we've always liked the way the bridge and separate string anchor are recessed into the body surface for a sleeker look and better empathy with the body mass.

The weight is minimal and the headstock is also small so instrument balance is good. The Corvette also benefits from the Warwick Just-A-Nut III - the latest version of this well-engineered and accurate two-piece height-adjustable nut, which is now made from a fiberglass-reinforced synthetic material called Tedur.

All in all it's a very well assembled bass with an excellent neck-to-body joint. The upper horn dictates the use of strap locks and these are supplied with the bass.

Sonically clean and clearly defined, the Corvette unleashes bass tones at their most vibrant. Excellent blended sounds are easy to coax from the circuit as you sweep from one pickup to the other.

Selecting the neck unit alone, and boosting the bass control, there's plenty of bottom end for a more robust and timeless Precision-type sound. Particularly good with this all-active set-up is the ability to produce excessive projection and those wonderful throaty hollow tones that were once solely attributed to Rickenbacker basses.

Played with emphasis on the clean, classic or downright dirty, the Corvette has a sound potential that's far bigger than its modest size suggests, but retains a distinctive Warwick trademark to the overall sound. The strings speak cleanly and evenly throughout the entire board, a quality further enhanced by that all-active system.

Slap players will realise its potential immediately, but rock players will probably need to hear it in action. Trust us, you won't be disappointed.

Relatively light in weight, small in stature but with a full scale length the Corvette has much to offer bass players. It packs great tonal punch with plenty of variety in sounds, all with that distinctive Warwick sonic imprint and overall feel.

The move in production has kept the price very attractive, and with a whole host of options and configurations your main problem might just be deciding exactly what you want. If you've never entered Warwick's world, this is a very good place to start.