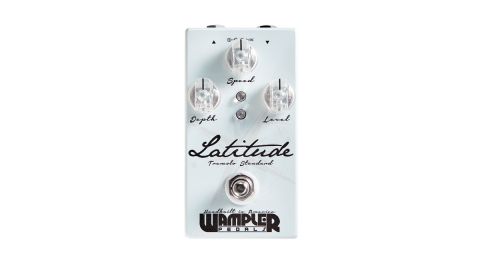 Wampler's Latitude Deluxe (£217), released last year, is a fully featured tremolo that includes tap tempo with four subdivisions, a choice of three waveforms, and adjustable Attack and Space for fine tuning of the wave shape.

That's a pretty comprehensive feature set, but if you are looking for something less complex, the newly minted Latitude Standard takes the Fender-inspired portion of the sound from the Deluxe and puts it in a more compact pedalboard-friendly form.

There's a no-brainer user interface that gives you access to standard depth and speed controls and a variable output that offers a slight boost to ensure your sound's prominence in the mix.

A pulsing red LED always show the tremolo speed, even in bypass, while a bright blue LED lets you know the effect is active.

Sound-wise, it's Fender-style tremolo all the way with a rounded sine wave instead of a choppier character, so it's a pedal for traditionalists rather than experimentalists who would be better to check out the Deluxe.