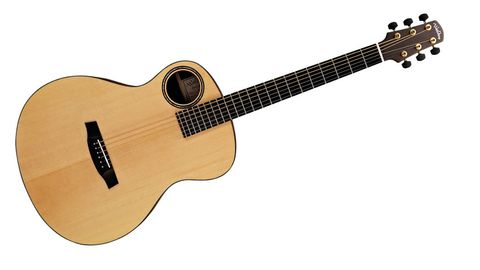 One of these should be in the collection of any creative performing or recording acoustic player.

If baritone electrics are few and far between, acoustic baritones - at least those that are affordable - are a rare breed. Indelibly associated with country music and 60s surf, the electric baritone, like the seven- and eight-string guitar, may have been appropriated by the metal down-tuning brigade, but in its acoustic format it offers the steel-string player another voice, in the same way a nylon-string does, perhaps.

Walden's B1 acoustic baritone is impressive. Despite its longer 679.5mm (26.75-inch) scale length, it employs Walden's grand auditorium body size, which feels businesslike rather than over-big. It's all-satin-finished, and the solid spruce top is very clean, with simple rosewood binding and decoration, aside from the soundhole, which is placed on the upper shoulder and rimmed with an abalone-detailed rosette.

Directly below it on the laminated rosewood side, right by the heel, is another open soundhole - the theory being that the player can hear more of the guitar, instead of the sound being pushed out of a conventionally placed soundhole. Of course, these dual soundholes invite easy internal inspection of the X-braced top, back bracing and kerfed linings, and it all looks very clean.

Overall, it's a tidy guitar; only the very thin back- and-sides finish might indicate its origin and price, since insufficient grain filler has left noticeable open pores in places. Conversely, if you like an organic-feeling thin finish, you have it here.

Obviously, the extended neck feels long in the hand, but the 46mm (1.81-inch) nut width and spacious bridge spacing means it's immediately comfortable for fingerstyle or hybrid 'pick and fingers' style, which really helps to voice the low strings.

It's supplied with D'Addario EXP23 Coated Phosphor Bronze 0.016 to 0.070-inch gauge strings and tuned a 4th below standard, from low to high:BEADF#B.Theneck itself is mahogany, with an adjustable truss rod and graphite reinforcement, but the deep-ish, shallow-shouldered C section is extremely comfortable.

It's also good to see an additional strap button, Taylor-style, on the treble side of the heel, though oddly, it's chrome plated. Still, this amounts to a minor blip on an otherwise near-faultless instrument.

This acoustic B1 (an electro is offered, the B1E), is one of the most evocative-sounding instruments we've had on test for a while. The low B and E sound like an acoustic bass, while the mid and high strings are beautifully full-bodied, obviously lower pitched, and rich sounding.

It's not hugely loud acoustically, but importantly, it's very well balanced. In fact, the bass is a little understated, and needs to be hit hard-ish - as we said, a hybrid 'pick and fingers' approach works very well here. That said, it's room-filling and records really nicely, either strummed or picked.

What you do with a baritone, however, is really up to you. Players such as Pat Metheny use a quite radical tuning, and you certainly don't have to stick to B to B. Simply raising the second string from F# to G gives you the bottom six strings of a seven-string - handy if you need to cover basslines.

Move into DADGAD intervals (AEADEA), and it sounds positively orchestral. Back in standard tuning, if you capo at the 5th fret, you're in normal E toEpitch,soifasongistoo high, slip the capo down to the third fret and you're in D to D - our G7th Newport capo worked perfectly. Again, because of those low strings, partial capos really come into their own, too.

Beautifully made, affordable, and with a hugely evocative and balanced sound, this B1 is a no-brainer for the acoustic player wanting to experiment in lower-pitched voicings and tunings. Superb.