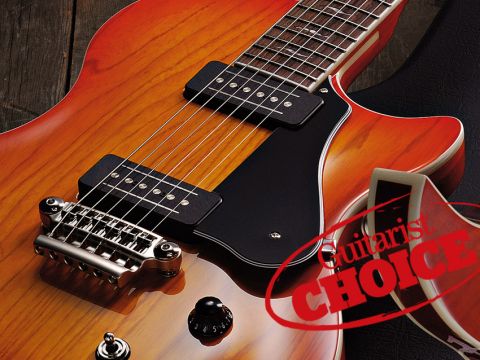 Offering much more that the Series 33 models, this is easily worth the additional cost. The sonic differences between the modes are apparent, with the P-90 and single-coil options impressing greatly.

The legacy of Vox-branded electric guitars goes all the way back to the early sixties, and arguably the most famous models of all can thank their legendary users for their notoriety.

These two models bear little resemblance to those of the past and instead include a selection of innovative features that should fascinate as well as impress. Although many of them are also included on the flagship Virage range, as well as the more modestly-priced Series 33 models, it's hoped that the models within the 77 and 55 series will mix the best modern guitar design with retail prices that won't cause anyone to turn away in disgust.

Currently the Series 77 includes just the double-cutaway design that we have on review here, but the Series 55 includes both double and single-cut designs.

Rich Lasner is vice president of development at Vox Guitars and during his time at Ibanez Hoshino was, among many other things, integral in the development of Steve Vai's JEM. Lasner's crack team also includes chief designer Eric Kirkland and senior production engineer Bob McDonald.

The Series 55 models are all-solid, with the bodies of the single-cut models - with a transparent finish, as on our review model - constructed from solid mahogany with an ash top. It provides a slightly reduced level of 3-D contouring than the Series 77, but remains a very tactile instrument.

"From the design perspective the body contouring is quite similar, although the 77 has a fully arched back instead of the bevelled back of the 55. In manufacturing, the 55 is all cut from solid, instead of the laminated top and back of the 77," says Kirkland.

All modern Vox electrics feature the company's own design CoAxe pickups. Neither a single-coil nor humbucker in the traditional sense, the design incorporates a central row of pole-pieces encased in a high-impedance coil that's flanked by two blades. The entire construction is then surrounded by a low-impedance winding, which cancels the hum.

"The basic idea is that the coils are coaxial: they're on the same plane, not stacked," Kirkland tells us. "The advantage is that the centre sensing coil can work like a true single-coil and the outer, noise-cancelling coil is outside the magnetic field, between the central poles and the blades.

The modes Kirkland mentions refer to the three options that are available for each pickup: clean, crunch and dirty. These can also be described as single-coil, P-90 and humbucker.

The guitar's electrics therefore comprise a standard three-way toggle for pickup selection, plus two additional three-way switches that allow for the independent selection of the three modes for each pickup.

So what are the differences between the Series 55 and the Series 33 guitars, the latter being just under £300 cheaper?

"Well, the 33 Series has a single master mode switch, with two modes, clean and lead, available," explains Kirkland. "The fingerboard and headstock are unbound, and the position markers are dots. The 55 Series has a mode switch for each pickup, and there are three modes available. The fingerboard and headstock are bound, and the position markers are wave inlays."

The 55's solid construction allows the tonal differences between the pickup modes to be more readily apparent than on its 77 counterpart, and although there's not quite as much raw power, string definition is improved.

The single-coil modes have the glassy nature of in-between Strat settings, especially when combining both pickups in that mode. The solo'd neck pickup doesn't quite possess enough strident girth to pull off an SRV impression, but for funk styles and clean arpeggiated chords it's very impressive.

For a nicely subtle and bluesy rhythm tone, the combination of both pickups in P-90 mode gives the best of both worlds, providing sparkle and depth in equal amounts, and switching just the bridge CoAxe to singlecoil mode allows for a passable resemblance of a Filter'Tron- loaded solid Gretsch, assuming you play the correct shapes.

The 33, although offering a selection of similar tones, doesn't really hold much of a candle to the 55 simply because of its reduced tonal options. The 33's lead mode, while sufficiently full, isn't as woody or organic as the 55's humbucker mode, and its clean option isn't close to the 55's single-coil settings in either character or authenticity.

Downsides? Well, just one that's applicable to both guitars. The short distance between the bridge saddles and tailpiece - 33mm compared to the just over 50mm of a Les Paul's tune-o-matic/stud tailpiece array - means that the sharp winds around the ball-ends of especially the three treble strings can dig into your hand and wrist when damping or resting on the bridge.

Compared to the 77, the solidbody 55 offers a more defined performance that really allows the difference of the three modes to come to the fore. It's the sort of instrument that could become a real workhorse.

Yes, the 33 models are the best part of £300 cheaper but they offer far less in scope. In short, if you can afford it, the 55 is more than worth the extra outlay. This guitar neatly fills the price gap between the Series 33 and the undeniably costly Virage II models. The VS-SSC55 is an immensely versatile solidbody that will rock with the best.