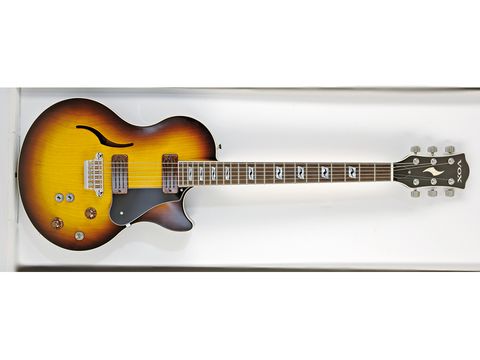 The SC leans towards a solidbody in terms of sounds and resonance, producing a different array of versatile tones.

The SC is a fairly bulky guitar, weighing in at 3.2kg, but it's still much lighter than a modern Les Paul (typically 4-4.5kg).

The centre block, viewed through just its bass-side f-hole, looks a little chunkier too. The neck joint is contoured but, without any binding, it looks a little more conventional. It has more than adequate access and feels balanced on the strap.

The SC has a solid and not overtly resonant acoustic sound that's got depth and character. There's a little more low-end than you might expect which, combined with a brighter voicing, creates a wider, slightly expanded sound.

Versatility and diversity are the keywords and a slightly lower set-up somehow enhances its more 'solidbody' status.

There's a bit of snap to the sound, you might need to roll off a little high-end either from the guitar or your amp, but then again that added edge enhances the clean modes that especially with FX sound lush and pristine - sort of like a more modern version perhaps of the DC, more ebony than rosewood if you like, more maple than mahogany.