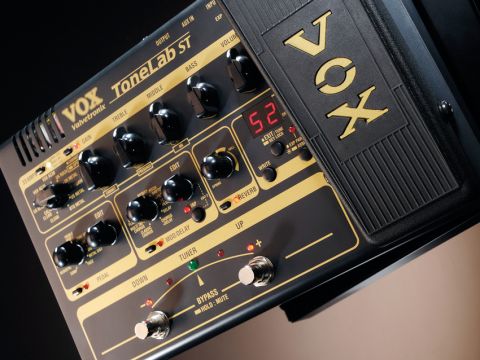 Since the launch of the first ToneLab modelling processor six years or so ago, Vox has progressively updated the concept. The first ToneLab needed a separate controller unit if you wanted footswitching ability, then along came the ToneLab SE with a full stage-worthy feature set including two treadles.

Later on, the ToneLab LE put the premise of the SE into a smaller package. While undoubtedly strong on sounds, the LE perhaps lacked some of the flexibility of its rivals by not having direct computer connection.

All that has now changed with the launch at this year's Frankfurt Musikmesse of the ToneLab ST, which as well as providing a similar set of tones to its larger sibling, also doubles as a USB audio interface, so you can use it as a front end for recording guitar to your computer as well as a rugged floor-pedal in front of your amp.

The ToneLab ST offers a modelled five-part signal chain starting with a stompbox effect feeding an amp and cabinet followed by a modulation/delay effect and finally reverb. Each of those five elements has its own switch to take it in and out of the chain.

There are 33 amp models available in three banks - Standard, Special or Custom - with the amp in each bank selected via an 11-way chicken-head rotary switch. Five more rotary knobs provide control over the amp's gain, treble, middle, bass and volume.

Choosing a cabinet model to go with your amp is a simple matter of holding down the cabinet switch until it flashes. One of 11 cabinets can then be selected using the gain knob - the number of the cabinet appearing in the ToneLab's small numeric display. While in this mode the treble knob adjusts presence and the middle knob turns on and sets the amount of noise reduction.

There are 11 choices of pedal to start off the signal chain, these include five different overdrive/distortion/fuzz choices, treble boost, compressor, wah, octaver, Univibe and an acoustic simulation. Whatever pedal is chosen has one major parameter that can be adjusted.

The next stage in the chain - the modulation/delay effect, again with 11 effects choices - has two editable parameters adjustable by a rotary knob or, where appropriate, a Tap Tempo button. At the end of the signal chain a single rotary knob offers varying degrees of spring, room and hall reverb.

The ToneLab ST has 100 memory patches on board, comprising 50 factory presets and 50 slots to store your own sounds. Whatever you set up on the front panel can be stored - including assignment of the pedal treadle, if not used for wah or volume, to a particular effect parameter. A pair of footswitches provides up and down access through the list of patches and can also select the onboard tuner.

The USB computer connection allows two channels of audio back and forth with the single output on the back of the unit acting as a stereo output for headphones or another monitoring system if not being used as the mono send to an amp.

A rear panel four-position switch selects EQ options to best suit connection to either a line output or Vox, Marshall or Fender amps, while an aux input allows connection of MP3 players and the like for playing along with music.

There are no operational niggles with the ToneLab ST - the tough metal body should be able to take the knocks plus the controls are simple to operate.

Setting up a sound is straightforward whether you are starting from scratch or just tweaking one of the onboard presets. There's a wide range of available sounds and the presets reflect that variety by providing tones to suit most musical styles.

Worthy of note are the first 20 factory presets, which aim to emulate songs well known to most guitar players and, while not exact clones, do come close in most cases.

As digital modelling goes, the emulations here are up with the best and feel quite responsive to playing dynamics, helped perhaps by the Valvetronix circuitry with an onboard 12AX7 valve designed to emulate the operation of a valve push/pull power amp.

The generic names of the 11 amp model options tell you what type of sound you will get but in some cases you can get up to three different modelled amps for the Standard, Special or Custom variations.

The clean position, for example, gives you a Dumble Overdrive Special, a Roland JC120 and a model of a four-band tone control for a pure clean sound. Overall, there's a nice mix of favoured old classics and newer models taking you from ultra-clean to full-on metal.

Some of the effects are modelled on specific pedals while others are generic; there's nothing important missing. Some combinations, however, are not obviously possible - Hendrix fans may be frustrated by having to choose one from fuzz, Univibe and wah rather than all three.

That said, you could set up a fuzzy-ish amp sound, then use the rotary or chorus+delay effects to emulate the UniVibe. In that sense you have enough on tap to emulate many of the great electric guitar sounds heard on record in the last 50 years, making the ToneLab ST an extremely useful recording tool.

It's also more practical than some USB-connected desktop processors as the treadle allows for some cool wah sounds and tactile control of other parameters.

For live use, the ST lags behind the LE in practicality as it lacks individual effect switching. If you're using a wah, you can switch it on and off by pressing the front of the pedal as standard, but for everything else it's a matter of setting up the presets with the sounds that you need and stepping through them.

If it's just, say, chorus that you need, you could set up one blank patch next to one that has chorus and just hit the up or down footswitch to alternate between the two. In theory you could set up a series of consecutive patches for a set of songs - something that will be streamlined with the free downloadable editing software that we've yet to try as it was not available during this test.

Vox's Valvetronix modelled sounds are widely regarded as among the very best and the new ToneLab ST represents a nicely affordable way to get into them.

It's a great compact unit for home practice with its headphone/line output and, with the USB connection, offers an extremely convenient way to record the exact guitar sound that you want directly to computer. While it doesn't offer a flexible effects switching solution for live use, it could still offer a toneful selection of physically selected sounds in front of your amp.