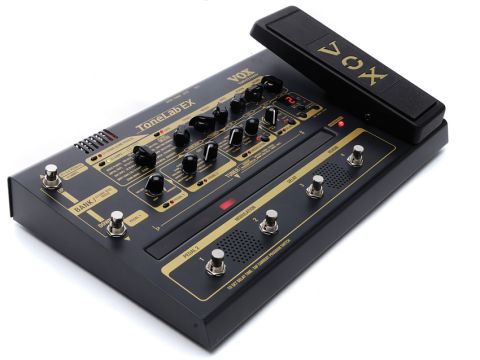 A greater number of dedicated switches would make the EX easier to use, but also increase its price more. Ultimately, the EX's selling points are its build quality, rich sounds and thoughtful additions to the multi-effects format.

We love valves. We lust after amp and effects models. So, when some bright spark combines the two, we're really enamoured.

There are also 15 'pedal' effects spanning different categories, one noise reduction model, a tuner with a large, bright display, a pair of built-in stereo speakers for "tweaking, editing and rehearsing" and a USB port for recording.

With so much at your disposal, there is a danger of getting overwhelmed, but navigating the sounds is easy thanks to the patch selection footswitches. Editing in more detail, however, does require a few more button-pressing combos.

There are plenty of Vox models, ranging from the classic (AC30) to the nouveau (Night Train), plus a number of unnamed models based on the usual icons. Any patch lets you choose any distortion pedal or amp model (but not both), and it's in these positions that you most appreciate that valve.

It brings out the best of the overdrives, giving you Vox's familiar jangle, some huge, thick, rock-stack sounds and cutting high-gain metal tones. The effects section is strong, too. All the 'standard' effects are there in spades, and Vox has worked them neatly into the presets.

Flicking through yields everything from shimmering tremolos to the psychedelic swirl of the stereo U-Vibe, and Andy Summers style modulation to spacey delays. Our particular favourites include the creamy funk of the Vox V847 wah model and the Techno Fuzz (a must-try for fans of The Prodigy or Pendulum).

By and large, it sounds bloomin' great, but the weakest in the effects section is probably the Pitch model, which sounded rather plastic to our ears.

The onboard tuner reminds us of a cross between Korg's Pitch Black pedal and its highly regarded rack tuners. You won't have any trouble seeing it onstage, and it responds perfectly. It's a definite strength over its rivals.

Those stereo speakers below the tuner are certainly a useful idea in principle, but in practice they're just too tinny to use as reference for a 'real' setup. We'd probably stick to headphones for practising.

Vox has clearly thought about what guitarists want and followed through with great sounding, valve-powered amp and effects models. The design bods have also paid attention to the details with additions like the USB port and tuner, the latter of which feels like an integral part of your rig rather than an afterthought of LEDs.