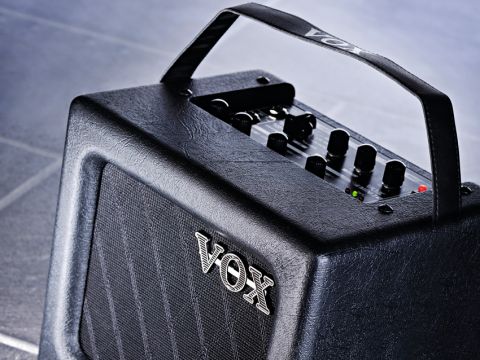 Busking can be great fun, and this will certainly let you sound good while entertaining the public. It can double as a decent tabletop tone generator, too.

This new mains and battery amp from Vox takes the open-ended, effects-laden portable amp concept of the DA range and extends it to include 11 amp models adapted from the excellent Valvetronix range.

Amp models comprise the usual suspects, such as AC30TB US Hi-Gain and UK Eighties, as well as an additional Line option, which provides a totally clean signal for use with acoustic instruments and even keyboards or drum machines.

The layout of the front panel is simple and uncluttered. An 11-way rotary chicken head pot acts as the model selector and a familiar complement of master, tone and gain controls allow you to make tonal adjustments.

If using the Line model, the gain and tone pots switch their function to regulating bass and treble respectively. There's a choice of four delays and reverbs, plus a further quartet of effects that, unusually, includes a compressor as well as chorus, flanger and tremolo.

The tap button enables you to set the speed of the delay and decay of the reverb and, when held, it doubles as a rudimentary but perfectly serviceable tuner: it only recognises E, but does so anywhere on the neck.

The mic channel includes an independent 6.4mm standard jack input, plus a trim or volume pot and level control for the delay/reverb. If you've set up a tape echo for your guitar, that's what you'll hear on this channel too, and the remaining effects aren't applicable.

In practical use, the MINI3 is certainly easy to lug about thanks to its removable carry strap and, with the amp in one hand and your guitar in the other hand, you're good to go.

We'd assume that most buskers would use an acoustic guitar to accompany their singing, so we took a Washburn WD55SCE, dug out our Oasis songbook and got to work.

We set up the Line model with a touch of compression and spring reverb for the acoustic and were immediately impressed by how pokey the combo is. The tone controls work well in sculpting the inherent zing of the guitar's piezo pickup and balancing its output with that of our ropey vocals took mere moments.

Even though the front baffle features a small circular port, this is hardly a full range cabinet, and the actual sound coming from the five-inch speaker is, when compared to more advanced acoustic amps at least, somewhat flat and boxy.

Turning to an electric, we feel that the cleaner tones are better suited for outdoor use, as they project more efficiently than those soaked in drive.

Both the BTQ Clean and AC30TB models work well for clear arpeggiated passages, while Black 2 x 12 and AC15 allows you to throw a little additional mid into the mix. Add some slow flanger to the latter and you're in Andy Summers territory, and impressively so.

Vox tells us that battery life can run up to 10 hours, although our example started to struggle after seven or so, but a PSU is included when a mains outlet is nearby.

As a busking amp, the MINI3 has the sounds and functionality to demand attention and is pokey enough to allow both you and your High Street audience to hear what you're playing.

Two local buskers we spoke to weren't too concerned about specific amp models, but we think they're a useful feature and will help attract attention and, ultimately, cash.

If heartily strumming away in public, either with a singing mate or simply along to some backing tracks, is your game the MINI3 is well worth a look.

And when you come back to your rehearsal or practice room, it continues to have uses that outstrip its competitive price tag. That prime spot outside Millets awaits…

Now hear the MINI3 in action...