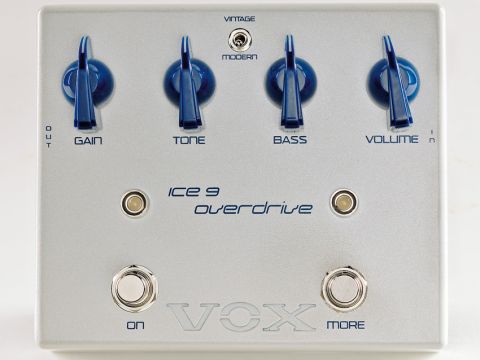 Far from just Satch-in-a-box, this is a versatile overdrive for any rock player not solely obsessed with gain.

It may seem contradictory that any player who uses high-gain amps would have any need for overdrive and distortion stompboxes. Not, it would seem, if you're Joe Satriani. He does have his amps running fairly hot anyway, but has always used stompers such as the BOSS DS-1 to add colour, as well as additional gain, to create his sound.

The all-new Ice 9 - named after track two on Satch's seminal Surfing With The Alien album - uses the exact same footprint as the Satchurator distortion. The chicken-head knobs remain from that design and here include independent Tone and Bass controls.

"The Bass control adds extra bottom to the sound before it enters the drive stage… Turning the Bass down will result in an overdrive tone with a crisp, extra bite. The Tone control shapes the sound as it exits the drive stage," says Vox.

There's a micro-switch here too, designed to give a greater degree of tone tailoring via either Vintage or Modern modes. Satriani himself has had his fingers deep into this part of the Ice 9 and the two voicings relate to genres of pedals rather than amps.

The Vintage mode is said to use a specially designed op amp integrated circuit; the Modern option utilises a germanium diode for a tighter, more focussed treble. The second of the top panel's pair of quality footswitches accesses the More function, which adds 14dB of volume boost, and the two neon-blue status LEDs are unmissable on any stage or floor.

If you start with the clean channel in your amp, in the Ice 9's Vintage mode and all the controls straight up, you're rewarded with a hike in level and drive, with a notable punch in the mid-range that has a hint of Ibanez Tube Screamer about it.

There's a reasonably soft-edged furr around notes and an element of compression to picking dynamics, which becomes even more apparent as you increase the gain of either the amp's basic setting, or the pedal itself.

A lot of people will associate Satch with a fairly hard distortion sound, but this will sit in anything from a blues jam to Southern Rock riffing with no shame whatsoever. The more aggressive your pickups, the more drive and compression you get.

Stepping on the More option adds drive rather than mere volume, giving an extra layer of thickness and sustain should you need it. There's enough variance in the tone pot to keep the sound cutting efficiently, which is a good thing given that tons and tons of drive can woolly things up quick smart, especially with high bass settings - knock it down a touch to keep clarity at gig levels, depending on your amp.

The difference between Vintage and Modern modes can seem subtle to begin with; Modern has a harder edge that brings some of those picking dynamics back to the table, with less apparent compression to our ears.

The Ice 9 has its best influence on quality valve amps. Our tests took in the new Fender Hot Rod Deluxe III and a Marshall 2245, both with positive results thanks to the tonal range from the bass and tone pots - warm, full and articulate, however you like it.

Before joining Vox, Satriani used his BOSS DS-1s and various Tube Screamers to shape his sound. We'd see the Satchurator and this new Ice 9 as the natural evolutions of those tones, respectively.

Indeed the Ice 9 is a toneful overdrive that's definitely more classic voiced than more modern, harder distortions. Subtler and easier to use than its sibling, it straddles some of the best bits of the venerable Ibanez Tube Screamer in Vintage mode, but with more strident attack and a slightly fuzzier edge in Modern. It's certainly not just for Satch fans!

Now listen to our audio demo to hear what the Ice 9 can do: