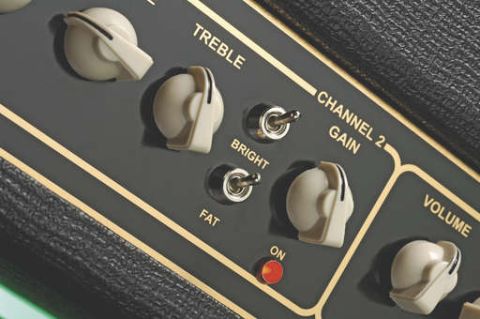 A formidable slab of backline for pros and pub rockers alike.

The Vox company has launched a brand new range of channel-switching amplifiers that are the most versatile and highest gain valve amps in its history.

Dragging the somewhat weighty AC100CPH head out of its box, the black vinyl covering, black control panel with gold legends and black plastic corner protectors are consistent with the Custom Classic series and neat enough, but the combination isn't quite as evocative of the company's most iconic era as it could be.

That said, sitting atop the V412BN cabinet with its diamond-pattern grill cloth, there's no mistaking this amplifier's heritage. The biggest deviation from what most of us consider synonymous with Vox occurs under the bonnet, so to speak, where a glowing quartet of EL34B valves provides the AC100CPH with 100-watts of juice.

Central to the iconic AC30 sound that players have craved (and amp-builders have sought to clone for decades) is the compression and sag inherent in an EL84-driven circuit.

It will be interesting to see how the EL34, a valve integral to the sonic fingerprint of modern Marshalls, performs in different livery and in combination with a different preamp circuit. In the preamp stage, the first of four ECC83s in the signal chain is low microphonic, which should help stop any unpleasant extraneous ringing noises entering the equation.

The front panel is largely surprise free, although the presence of independent reverb controls for each channel is a welcome addition as it's unlikely that you'd want the same reverb setting across both channels in a clean/dirty switching set up.

On channel two, the bright switch introduces an extra capacitor to lift the high end, while the fat switch adds middle and boosts the gain. Again, independent three-band channel equalisation increases the versatility and tone-shaping possibilities.

Channel one's EQ is augmented by a tone cut of the kind that adorned the very first amplifiers to bear the Vox name, as you turn it up, the high end is attenuated, smoothing out your clean sound, which is eminently useful for guitars with overly brash pickups.

Around the back, a pair of speaker outputs can be switched to accommodate an eight or 16-ohm load, while the effects loop has level and bypass switches. The DI output has a rotary level control, unbalanced jack and balanced XLR outs, a ground lift switch and a low pass filter that when engaged simulates the frequency response of a guitar speaker cabinet for direct recording.

Because of its position in the circuit after the power amplifier's phase inverter valve and before the master volume control, you can wind the master volume right down for silent direct recording. That said, silence is the last thing on our minds as we rev the AC100CPH up and plug in…

With a Telecaster strapped on, there's a bucketload of grin-inducing Beatle-esque AC30 sprang available with channel one's gain control rolled back below 10 o'clock. Switching to an ES-335 pushes the clean sound into a touch of break-up and adds extra warmth and sustain.

This is a really effective tonality for expressive neck pickup blues lead that rewards a stinging picking hand attack, while flipping to the bridge humbucker unleashes a chiming, resonant voice that is perfect for Johnny Marr-style chordal parts.

The attack isn't quite as satisfyingly spongy and compressed as a bona-fide EL84-powered amplifier, but many rock players will enjoy the firmer response, particularly in the bottom end.

If you like your lead sounds to sear their way through the mix there's no shortage of edge - or The Edge, for that matter - and as the gain control climbs upwards, there are Brian May-isms in spades, while a neck single-coil is just the ticket for swampy PJ Harvey-style grungy blues riffs.

Switching to channel two with the gain cranked up and the bright and fat switches disengaged yields a satisfyingly raspy high-gain sound that begs to be force - but is perfect for obnoxious riffing and AC/DC-style booze rock shenanigans.

Engaging the fat switch is almost like throwing a dose of dirty old fuzzbox into the mix, but in a very musical way, and while the bright switch is more subtle, it certainly helps to wring a little more clarity from woollier pickup selections.

For searing, Jack White-style blues fireworks, flip both switches on and roll up the gain and channel volume. However, this amp isn't all about preamp gain, so even the dirtiest sounds can be tamed with the guitar's volume control to deliver a useable clean voice.

Also, rolling back channel two's presence control tames some of the aggression in the high end if desired. The reverb circuit has an abundance of useable depth on tap and is well-equipped for anything from a controlled Shadows-like ambience to full-on Dick Dale-on-steroids surf carnage.

You need to ask yourself whether you honestly need the power of the 100-watt version of this amplifier, as it's capable of kicking out ferocious volume. That said, the increase in available clean headroom compared with an AC30, for example, will hold lots of appeal.

Despite the quartet of EL34s, the AC100CPH isn't an attempt by Vox to move into the metal arena or indeed too far away from what most would consider to be the company's signature sound.

For anything from crystalline, reverb-drenched twang to trashy Stooges overdrive, via Britpop and Brian May crunch, the Classic Plus head is a classy, versatile performer.