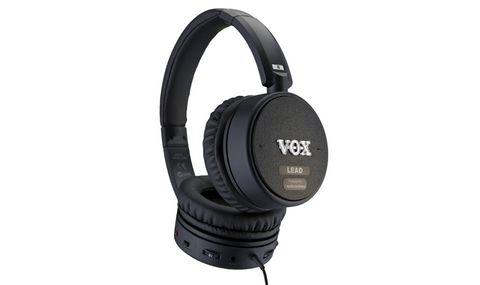 Privacy and mobility when practising, and a quality set of uniquely styled headphones, too.

Okay, so you want to practise your guitar but you want to keep it to yourself - what do you do? Well, the traditional approach would be to use headphones to plug into your chosen sound source, which could be a computer, smart phone/tablet running amp sim software or a perhaps even a hardware amp simulator.

Now, that may work absolutely fine, but could get a bit messy with the attendant tangle of guitar lead, headphone cable and maybe a power supply - plus the likelihood that you'll be stuck in one place doing it. How great would it be if you could just plug some 'phones into your guitar output socket, be completely mobile, and still get a decent sound?

Well, that's exactly what some bright spark at Vox must have been thinking when they came up with the concept of the amPhones. You may have already twigged that these are an evolution of Vox's existing amPlug amp simulators - you just plug one of those into your guitar and add headphones. But the new amPhones simplify the whole thing by having the amPlug's technology built directly into a set of Audio- Technica headphones, which you can also use as normal 'phones.

The amPhones come with a standard jack so you can connect directly to your guitar's output, but this can be unscrewed to reveal a mini-jack for use with mp3 players and the like. Vox has produced four amPhones sets so far - besides the Lead and Twin versions we have on review, there are also AC30 and Bass versions.

Physically, the amPhones are nicely put together, and easily adjustable for a comfortable fit. The connection is via a straight 1.3m cable, which is just right for connecting to your guitar without getting in the way, although those who favour a low-slung guitar when standing may find the cable a little on the short side. The amPhones will work like any set of headphones until you turn on the battery powered amp simulation with a red LED-equipped switch on the left earcup.

The left earcup is also home to a set of four thumbwheel-style rotary dials controlling the output volume, amp gain, amp tone and effects added to the signal. The effects dial offers no effects at its zero position, but if you advance it a little you hear an audible 'beep', which means you have some chorus effect. Advancing the dial further adds more chorus until you hear another beep and you get delay, the amount of which you can increase until you hear the next beep. After that, the dial increases the reverb amount.

In practice, it's a little fiddly reaching behind your ear all the time to adjust a dial, but chances are you'll find an effect you like and not need to touch the dial again. The Bass version of the amPhones eschews the effects for a compressor, with the dial adjusting its sensitivity.

Playing through the amPhones is a rewarding experience, with an amp sound that is nicely sensitive to your playing dynamics. With effects engaged, particularly the reverb, there's a crucial sense of spaciousness and warmth to the proceedings that a dry sound in headphones can lack.

The Twin offers a Fender vibe with a sense of an open-backed cabinet pushing the air from sparkly clean through degrees of edgy bite to, at full gain, an overdriven sound still retaining a glassy-edged clarity. By contrast, the Lead amPhones have more of a 4x12 stack character and higher gain, taking the degree of overdrive and distortion much further to provide all manner of crunch through to a fully saturated flowing lead sound that'll sustain until the pubs shut.

The amPhones experience is one of being immersed in your own world of pure guitar playing, disturbed only if you choose to use the mini-jack aux input to play along with your CD or mp3 player.

While you might wonder why you'd buy these when the amPlug and your own 'phones would set you back nearly £80 less, it's important not to forget that these are quality, cool-looking headphones in their own right. They're good for both listening to music and recording, and the closed-back design minimises any bleed and adds a degree of isolation. So, a double whammy then, and an inspired idea that works really well.