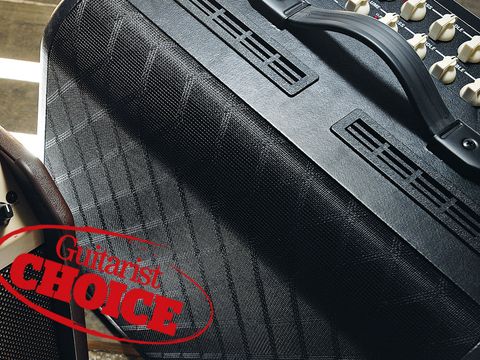 A splendid acoustic-amp debut that shouts success all the way.

There's still a market for what we might call heavyweight acoustic backline, and SWR's California Blonde and Hartke's AC150 are two examples. But the overwhelming trend in recent years, exemplified by the likes of AER, Roland and the original Trace Acoustic combos, has been for compact amps offering much easier portability yet often packing very healthy power ratings and versatile facilities.

The ultimate so far in the power-to-size race is ZT's Acoustic Lunchbox, dishing out 130W RMS from, well, a very small box. Vox's AGA150, meanwhile, is somewhat larger, but delivers 150W from an enclosure that's still a painless heft.

Along with the similar but smaller AGA70, these are not only Vox's first forays into acoustic amps, but are unusual in including a valve-driven channel.

In keeping with the brand's vintage vibe, Vox has given its AGA combos an appealing retro-cum-Art-Deco styling, something that visually sets them apart from many other acoustic amps on the market.

Apart from power rating, the only circuitry difference between the 70 and the 150 is that the latter's slightly larger cabinet houses a one-inch tweeter as well as a 6.5-inch full-range driver, whereas the 70 has just the main speaker.

The 150's sturdy, all-black cabinet, tipping the scales at a manageable 12kg or so, also includes a speaker-stand mount, which the 70 doesn't.

As on both amps, the AGA150's two channels are usable for both instrument and mic, one of which loads in a 12AU7 valve, a rare find on an acoustic amp.

That aside, the array of facilities on both the normal and tube pre channels is identical. Each kicks off with gain-switchable jack and XLR inputs, the latter providing 15V phantom-power switching to accommodate condenser mics.

The rotaries, all topped with vintage-appropriate cream chicken-head knobs, include three-band EQ, a colour control that introduces a gently progressive scooping, and a level control for the good-quality digital (hall-type) reverb. Completing each channel's line-up are clip indicators and a decent preset digital chorus of medium rate and depth.

Alongside volume in the master section are an antifeedback notching rotary (of unspecified cut and frequency range) and a mute switch, ideal for discreet tunings mid-gig as it doesn't kill the output from the amp's 'tuner out'.

A goodly provision of other real-panel connectors includes a DI out, stereo line-in jacks for hooking in, say, a keyboard, a mini-jack aux in for an external accompaniment device, and a footswitch input that accepts Vox's optional VSF2 dual footswitch for remote triggering of mute and FX bypass.

Not having an FX loop is an arguable omission, but that doesn't preclude using front-end effects.

One inhibiting factor to extracting the ultimate decibel count is clipping at high volumes - even with gain switched to low - although the amp is pretty tolerant of the LEDs lighting up, and you really need to be pushing it to introduce any unwanted distortion. Having anti-feedback on board is a real boon and fairly effective at these levels.

Tonally, the AGA has a versatile, finely-tuned set-up, offering excellent naturalness and range from either channel, though again with the proviso of going easy on the tweeter-led high-end, albeit that the inherent tone here is nicely sparkling, not harsh.

Icing on the cake, undoubtedly, is the extra scope offered by the amp's Tube Pre channel. It not only adds subtle extra warmth and that typical valvey, compressive expression and attack to a regular electro performance, but proves no slouch - with appropriate EQ settings - for mellow jazziness, whether using a flat-top electro or even a humbucker'd semi-acoustic.

Whether or not it was Vox's intention to extend the AGA's applications in that latter electric direction, it works, adding a dimension not usually the domain of your average acoustic combo.

The AGA150 has everything pretty much sewn up: user-friendly features, a still-compact, high-power format, and a gamut of sounds that, thanks to the valve element, is impressive both in quality and range.