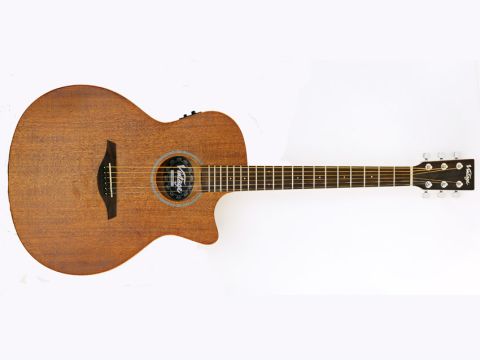 As budget instruments go, this is a fine offering that punches above its price tag.

There will be much sweating in the marketing departments of Vintage's rivals: "An all-solid acoustic with a Fishman preamp for £250?" they'll splutter.

Makers of laminate bodied acoustics say their guitars offer greater consistency, but for most players, solid wood means more resonance and a tone that improves with age.

To combine that with a preamp from one of the world's most respected brands is big news at this price.

Nobody wants to look like they bought the cheapest guitar in the shop, so luckily the aesthetics match the spec here. The minimal decoration and satin finish give a subtle rather than budget appearance, allowing the wood (and your playing) to speak for itself.

The Fishman Isys+ preamp is simple, with no graphic EQ, but that should make setting your tone straightforward. There are treble and bass controls, plus a phase button to defeat squealing feedback.

With just seven LED segments, the built-in tuner isn't the most accurate you'll ever use but it's useful for emergency tweaks between songs. The battery compartment is thoughtfully placed next to the input for quick changes on the fly.

Mahogany-topped acoustics have a big reputation for blues. They're not as obviously loud or zingy as spruce, but have a warm mid range with reduced top and bottom that lets the detail of your playing come through.

This sort of top was out of fashion until recently, meaning its use here helps the guitar stand out. Plus Bob Dylan started out with a top like this, so budding singer/songwriters should take note.

This guitar has a comfortable action and neatly finished frets, but it doesn't outperform its price tonally because it's not especially rich or complex. Unlike a laminate model, though, this should improve over time.

Plugged in, there is some of the high-end harshness you get with piezos, which makes the system better suited to a live band mix than a solo performance or recording.

Vintage has undergone a Skoda-like transformation, going from making stepping-stone instruments to offering features above its price bracket. The spec alone should sell this guitar, but playability is its real ace.

The only disappointment is the tone, which doesn't punch above its weight like the rest of the guitar. Even so, given that £249 is the most you'll see this guitar selling for, don't be surprised when you end up buying it.