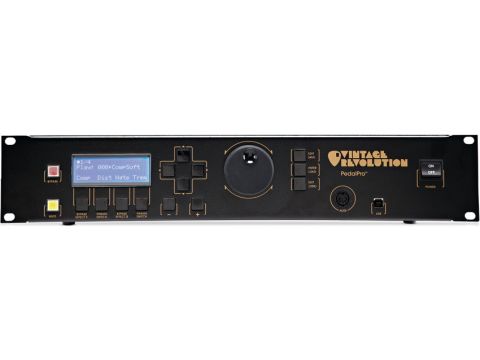 Every guitarist has their own approach to using effects: some like to have individual pedals they can turn on and off at will; others prefer a patch-based approach where they can turn several effects on simultaneously, either by using a digital multi-effect unit or by using a switching solution such as those made by TheGigRig, which can instantly recall your hardware pedal combinations.

Dutch company Vintage Revolution favours the patch-switching method, but has come at it from its own unique angle with the PedalPro system. What you get is a range of pure analogue effects - equivalent to a load of vintage or boutique stompboxes - with digital control over them, built into a rackmount unit with mono or stereo output.

These effects can be arranged into nine different effects-chain configurations, with full parameter adjustment and stored as presets (500 memory slots are available) that can be recalled with the included Pedalino foot controller.

The PedalPro rackmount system is constructed to a high quality, as is the Pedalino, which connects to it via a cable but needs its own nine-watt power supply. The Pedalino is, in fact, quite unique among pedal controllers in that it has no mechanical parts, its functions taken care of via four large switch pads that are pressure-sensitive and can be set up to carry out different functions depending on how hard you press them. There can be up to three levels of pressure - level one, level two and level three - indicated by how many of the three red LEDs in the centre of the unit light up.

In terms of live functionality, one pad operates bypass while two scroll up and down the preset list - utilising three pressure levels you can scroll through the presets one, 10 or 50 at a time. The fourth pad loads the selected preset, so two pads must be pressed to change sounds in this mode.

There is, however, another mode that allows you flexible access to 18 favourite presets. A bank of presets is selected with the first pad, while the other three pads directly access the presets in the bank. There are two variations on this mode - presets can be split into three banks of six, so each pad has a different preset at levels one and three. Alternatively, presets can be split into two banks of nine, with each pad accessing a different preset at levels one, two and three.

While the pressure pads are innovative and space-saving, they do take some getting used to, particularly if you are trying to get to level two. We got quite frustrated at hitting a pad too softly or too strongly and going to the wrong level.

Of course, this is the sort of thing that you get better at the more you do it, so we'd be wrong to dismiss it out of hand after just a small amount of time with the unit. However, with all the other things you have to cope with onstage, some may find it one level of complexity too far compared to the no-brainer of a conventional footswitch that's either on or off.

Without getting into an analogue versus digital debate here, Vintage Revolution's view is that analogue is definitely the way to go for the optimum sound, and the purely analogue signal is at no point digitised. The company tells us that only the best high-end audio components are used in the effects chain, and that appears to be borne out by the sound quality, which is excellent.

The effects are placed in a set order - compressor, preamp (boost), distortion, tremolo/ panner, phaser, post effects (chorus, flanger and delay), noise gate - but there are also a couple of filters that can be placed at various points in the chain, creating the previously mentioned nine configurations, one filter being an inductor filter for wah effects, while the other has a wide range of sonic capabilities, including vowel effects.

Both filters can operate in manual (via an expression pedal connected to the Pedalino), auto or envelope modes. In addition, there are external effects loops, so you can add extra effects both before the preamp and in the post-effects section, just before the noise gate.

There's a massive array of editable parameters - many more than you would get with a chain of conventional analogue pedals, including a choice of modulating waveforms, so there's opportunity to create and store a wide range of original sounds. Those who must have an analogue signal path will be excited about the sonic possibilities on offer.

Whether it's a patch dedicated to a single effect or one with several effects active, there are some very usable sounds here - plenty of phasing, chorus and flanging variations reminiscent of classic vintage pedals, plus authentic amp- style tremolo.

Then there are several shades of very natural and valve-like distortion, and a wah that sounds and behaves like a nice vintage Crybaby when used with an expression pedal, which can be assigned to a range of analogue parameters.

The idea of putting multiple analogue effects in a rackmount unit is not entirely new - we had the likes of the MXR Omni and the Ibanez UE400 and UE405 in the eighties - but could be seen as quite radical in 2012 and has never been seen with this level of control.

What you're buying is a deep resource of timeless analogue sounds that work brilliantly as part of your overall guitar tone, and Vintage Revolution is to be applauded for trying to create something different.

However, the practicality, particularly for onstage use, leaves something to be desired. Firstly, the system is currently entirely patch-based, which doesn't allow individual effect-switching flexibility; most digital multi-effects pedals from major manufacturers include some sort of 'manual' mode to give you access to individual pedals within patches.

The PedalPro system doesn't do that at present, but functionality will be extended with a 'solo' mode, to be implemented in a firmware update later this year, which will allow the switching of one or more effects on and off within a preset.

Secondly, switching between patches either requires two footswitch presses or applying the right amount of pressure to the pad, which, although it's the sort of thing that comes with practice, is not something we'd want to be concentrating on in the middle of a gig.

The bottom line is that, while the PedalPro could be a real asset for recording, it may not be the most practical of options for onstage performance.