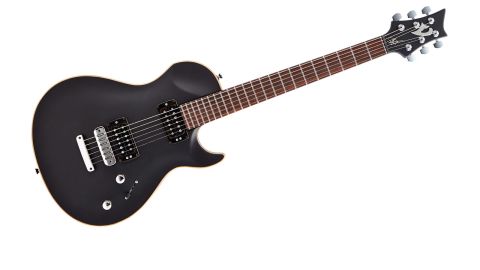 A versatile rock guitar that sports one of the most playable necks out there.

Vigier's take on the single-cut design was introduced to the world back in 2009 in the form of the GV Wood.

Named in honour of Patrice Vigier's late father, Georges, the GV range has since been extended to include the GV Rock and GV Metal, both with different appointments that reflect those respective musical styles.

For 2015, there are some eye-popping new colours, too, for the GV Rock: Revolution Green Matte, Yellow Matte, Red Matte and the Revolution Black Matte here - all with attractive natural edge 'binding'.

Vigier refuses to toe the line with fashion or convention: a '59 LP replica this isn't. First off, the body wood is alder (with a trim 51mm centre depth that thins out to 38mm at the rim) and an overall weight of 3.8kg - a lot lighter than many of the single-cuts we've played recently from Nashville. Flip the guitar over and you'll see a bolt-on (not set) neck.

It has nothing do to with keeping down manufacturing costs, either - Patrice Vigier simply believes there are no sonic benefits to a neck-thru or set-neck.

All Vigier guitars feature the patented 10/90 Neck System: 10 per cent carbon fibre, in the form of a central spine, and 90 per cent maple. The carbon fibre reinforcement does away with the need for an adjustable truss rod.

We've written about this system in the past, but it can be best underlined thusly: imagine a guitar that no matter what the weather conditions, no matter how far you've travelled, still feels exactly the same every time?

No-one is suggesting that truss rods are a thing of the past, but at the very least Vigier has theoretically created the ultimate travelling guitar for a globe-trotting musician.

Another difference is the scale length, which at 630mm (24.8 inches) is slightly longer than Gibson's actual scale length of 624mm (24.6 inches), while the un-inlaid rosewood 'board sports stainless steel frets.

Another Vigier-ism - and one that's often a divisive issue among guitarists - is the zero fret. One downside that both proponents and detractors can agree on is that you might have to replace the entire zero fret if string wear leaves an indentation.

To counter this, Vigier's new 'ZeroFret-S' design gives each string its own fret segment, so you only have to replace one piece of it at a time - a reduction in both replacement time and cost.

Many a wonderful guitar neck has been cradled here at Guitarist, but we have to say that this one is very special. Described as a 'D' shape, it feels more like a portly 'C', and is ludicrously comfortable; rarely does a neck feel so supportive of your fretting hand.

We sometimes don't appreciate just how much support your first finger needs from the underside of the neck. For Vigier to create a profile that provides the necessary leverage for easy bending, but isn't so thick that it encroaches on the posture required for more technical playing, is a real achievement.

Straight out of the case the guitar requires no setup tweaks and is armed with a low action that, despite perhaps being a little low for some tastes, still lets you dig in.

Again, the neck proves a comfortable platform for any style you wish to throw at it and, coupled with the ultra-smooth stainless steel frets, enables an effortless journey up and down the fingerboard, allowing you to switch from rhythm to lead with ease.

In choosing pickups for the GV series, Vigier blind-tested more than 60 from a vast array of companies. These Amber humbuckers were chosen, and the bridge pickup has a very punchy, bright character that at first is a little disconcerting when you look down at the single-cut-style body.

Through a Marshall JVM410 it certainly underlines its rock credentials: loud and resonant, offering tone chock-full of character and one that will have no trouble cutting through the mix of a very loud band.

Positions two, three and four on the five-way selector offer some realistic Strat-like tones not normally associated with this shape. Indeed, no doubt in part due to the sonic qualities of the alder body, some very authentic Nile Rodgers-style funk can be coaxed - it's certainly more than just a rock guitar.

If you're looking for that traditional Les Paul tone, the GV may be a little too bright. But the ethos of Vigier is about innovation rather than emulation and the GV Rock is clearly not intended as an other-brand alternative to a Les Paul.

Instead, it's a very a serious rock guitar in its own right... and then some! With a to-die-for neck, and one that plays the same day after day, night after night, it's beautifully made with plenty of sounds on tap.

Let's be honest, isn't that the type of guitar we serious guitarists all claim we're looking for?