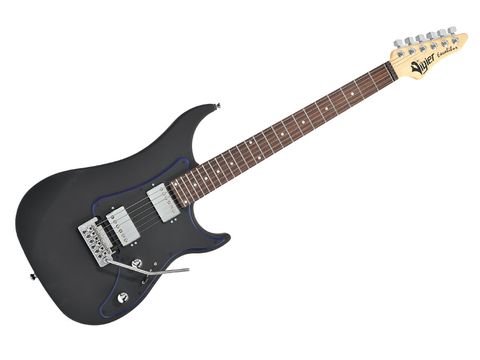 Built with a master's hand, with all the sophistication of one of Vigier's top-end models and the handsome aesthetics of a Parisian playboy, the Excalibur Indus is a lot of guitar for the money.

They're a classy crowd, the French. As a nation, they have an instinctive grasp of the difference between glamorous and gaudy.

For Vigier, purveyor of sleek shred guitars since the late '70s, this particular national characteristic has been channelled into its luthiery.

In fact, Vigier has built a reputation for the sort of guitars that, were they people, would be spotted tumbling out of exclusive clubs with supermodels. Often found in the hands of serious players - including the likes of Guns N' Roses man Ron 'Bumblefoot' Thal and our guest tutor Stanley Jordan - these are very much top-tier guitars.

Of course, instruments of this calibre don't come cheap, yet here's the Excalibur Indus with a sub-£1,500 price that's sure to raise more than a few eyebrows.

That's not to say that this is a cheap guitar - far from it. Take the finish, which is matted but textured to give a rough, mottled feel. This classy touch gives the guitar an air of sophistication, but don't be too heavy-handed with it; the downside of this unusual finish is that it marks extremely easily.

Still, the Indus is undeniably pretty, as well as extremely well balanced and comfortable to get to grips with standing up.

Unplugged, it's nicely resonant, but plugged in it really takes flight. The combination of a solid alder body and a pair of DiMarzio PAF Classics (complete with coil-split)provides sparkling clean tones, rich and full-bodied, ripe for a touch of chorus. Throw in a bit of distortion and you might as well prepare yourself for a night in.

The two-octave neck is just sublime, beautifully finished and a joy to hold. Luxuriant runs up and down the length of the rosewood fingerboard are a breeze - a shredder's paradise, even - while the clarity of the pickups and locking machine heads ensure every note is clear as a bell, crisp and pitch perfect.

That neck is worth closer inspection: 90 per cent maple and 10 per cent carbon, it might sound like the result of a French space program, but it actually means there's no trussrod. Vigier has been using this system for years in the belief that it adds sustain, and on the evidence of this guitar it's hard to argue otherwise.

There's also a zero fret, which keeps the action regular and helps maintain a consistent tone. All told, there's no doubting that the neck on the Indus is a thing of beauty, so it gets the thumbs up here.

In fact, the next time you're thinking of splashing your savings, why not try something fruity and French? You might just enjoy it.