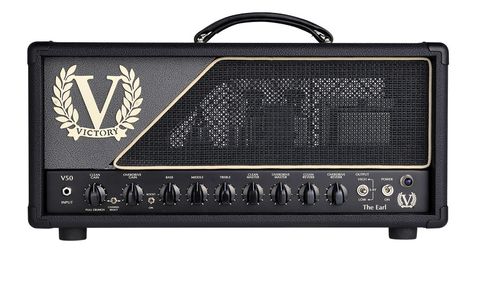 With its boutique-meets-mainstream style and immense tonal flexibility, here's an amp that you really need to try.

We seem to have been welcoming the arrival of a fair few new British amp brands in recent months, but few of them have Victory's pedigree.

Indeed, with former Cornford designer Martin Kidd at the helm, and a certain genius guitar player (in the form of Guthrie Govan) as its first endorsee, Victory Amplification's launch has been hotly anticipated, so we're eager to see what this new 50-watt V50 The Earl head has to offer.

With a well-established reputation for producing some of the UK's best-made amps, you'd expect Kidd's new range to be up to a similar standard, and on first impressions the new Victory amp doesn't disappoint. The head has a tough birch ply cabinet covered in heavy duty black Tolex, with off-white piping and a black grille interrupted by an angled grey panel with the Victory badge: certainly unique.

Inside the formidable steel chassis there's a mixture of different electronic assembly techniques: with the power supply on a printed circuit board, while the preamp circuitry is built up on a fibreglass turret board. Smaller PCBs hold relays to handle boost and channel switching as applicable; the rest of the components, including all the front and rear panel controls and valve bases, are hand-wired.

"Things like relays for channel switching and radial capacitors, which we use in the power supply, are made to be attached to a printed circuit board. Hanging them off wires and gluing them to something might satisfy a point-to-point purist but it doesn't make for a robust product, so we used quality PCBs for those items, while other things are hand-wired, like the valves."

As you might expect, there's a lot of wire and even allowing for the fact that this is a production prototype model, the wiring and soldering is very good. The overall impression is that the Victory amps are serious products, built to last in the professional environment.

The amp is loaded with a push-pull pair of EL34 PM Tubes valves and a valve-powered spring reverb, with separate level controls for each channel - a nice touch.

V is for versatility

The twin-channel V50 also features separate gain and volume controls, sharing a straightforward bass, mid and treble EQ. There's a pull-switch on the clean channel's gain knob that adds a significant boost, with a separate boost function on the lead channel handled by a small toggle switch on the front panel. A second small toggle swaps channels.

On the rear panel there's a comprehensive selection of speaker outlets, a pair of jacks for the effects loop send and return, and a socket for the supplied two-button footswitch, which changes channels and toggles the lead channel boost function.

The V50's clever three-way standby switch offers full- and low-power options, while hidden behind the metal grille on the top of the chassis is another toggle switch that presets the V50's bias for 6L6 or EL34 output valves.

Overall, the amp certainly has many of the 'boutique' boxes ticked: the styling has a unique yet familiar feel that many players will warm to, while the build quality is definitely a cut above the competition.

The V50 powers up with minimal hiss and hum, which is always an early indicator of a well-sorted circuit. The spring reverb effect is also mostly noise-free - it's not clanky like some spring reverbs can be, and has a noticeably smooth tail to the decay.

Some tonal compromise is often necessary when using amps that share a single tone circuit between two channels. However, the V50's best clean and overdriven sounds occur with the tone controls in more or less identical positions for both channels.

"I spend a lot of time experimenting with different types of EQ but invariably find myself coming back to where I started," observes Kidd. "The bass mid and treble controls are designed to interact smoothly and cover the full bandwidth used by the guitar. There's no sonic need for a presence control and the V50 doesn't have a negative feedback loop."

The clean channel in non-boost mode has a sweet treble tonality with a balanced bass and midrange response that flattered all of our regular 'go-to' guitars. There's just enough bite with the gain control wound up for low-ish output single coils to start singing, while pulling the boost switch for this channel unleashes a wilder character, with enough gain for some very juicy blues and country-style lead or rhythm work, especially if you're using a guitar loaded with humbuckers.

The V50's lead channel has a distinct creamy overdrive tonality that will please those familiar with Kidd's previous design work, with sustain and balls in abundance, especially if you hit the boost switch. While the rhythm channel worked well with all the instruments we tried, the lead channel really came alive with a powerful humbucker - the darker tone of a '72 Les Paul Custom suited it perfectly, balancing warm throaty mids with just the right amount of bite to pull out pinched harmonic squeals.

"Some players like to use the overdrive in non-boost mode as a crunch channel and most of them tend to leave the clean channel in boost mode," says Kidd. Combined with the footswitchable boost option on the lead channel, this gives the V50 a lot of versatility.

The boutique amp market is dominated by American brands, but there's room for competition from other countries and Victory has found a surprising niche here. Unlike many boutique products, the V50's deceptively simple controls provide flexibility more often associated with mainstream products - yet with world-class tones.

Features aside, sales today seem equally dependent on high-profile artist endorsements and Victory has a very big ace up its sleeve in the formidable Guthrie Govan.

"We're thrilled to have Guthrie onboard," beams Kidd. "Not only is he a stellar player, he's very knowledgeable about amps and tone: a great ambassador for Victory."

Add a pricing structure that's more than fair for this standard of product and we think Victory has everything it takes to succeed in a tough market, sitting in that elusive area where boutique meets mainstream, and therefore offering the optimum balance of both.