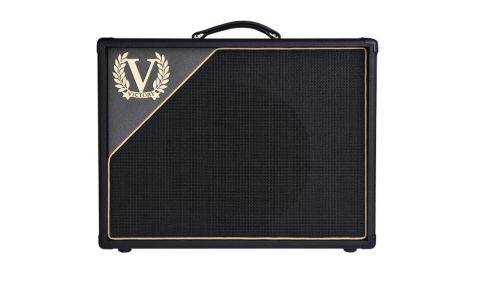 With former Cornford designer Martin Kidd at the helm, and the inimitable Guthrie Govan as its first endorsee, Victory Amplification's launch has been hotly anticipated, so we're eager to see what the 10-watt V10 The Baron combo has to offer.

With a well-established reputation for producing some of the UK's best-made amps, you'd expect Kidd's new range to be up to a similar standard, and on first impressions the new Victory amp doesn't disappoint.

The combo is solid pine and covered in heavy duty black Tolex, with off-white piping and a black speaker grille interrupted by an angled grey panel with the Victory badge: certainly unique.

Inside the formidable steel chassis there's a mixture of different electronic assembly techniques: with the power supply on a printed circuit board, while the preamp circuitry is built up on a fibreglass turret board. Smaller PCBs hold relays to handle boost and channel switching as applicable; the rest of the components, including all the front and rear panel controls and valve bases, are hand-wired.

"Things like relays for channel switching and radial capacitors, which we use in the power supply, are made to be attached to a printed circuit board. Hanging them off wires and gluing them to something might satisfy a point-to-point purist but it doesn't make for a robust product, so we used quality PCBs for those items, while other things are hand-wired, like the valves."

As you might expect, there's a lot of wire and even allowing for the fact that this is a production prototype model, the wiring and soldering is very good. The overall impression is that the Victory amps are serious products, built to last in the professional environment.

The amp is loaded with PM Tubes valves: an esoteric mixture of an EL84 and a 6L6, running in parallel single-ended configuration, plus a valve-powered spring reverb.

The V10's architecture features a single-channel preamp feeding a dual-channel output stage. We get a gain control, bass, mid and treble EQ knobs, a reverb level and separate output volume controls for the 6L6 and EL84 output valves.

A small toggle switch operates a useful gain boost, which is also footswitchable. Victory has put the effects loop jacks on the top panel where they're more accessible - if you look under the amp you'll find the less accessible bottom panel, which features a pair of extension speaker jacks and a socket for the single-button boost footswitch.

Overall, the amp certainly has many of the 'boutique' boxes ticked: the styling has a unique yet familiar feel that many players will warm to, while the build quality is definitely a cut above the competition.

The amp powers up with minimal hiss and hum, which is always an early indicator of a well-sorted circuit. The spring reverb effect is also mostly noise-free - it's not clanky like some spring reverbs can be, and has a noticeably smooth tail to the decay.

The V10's nine-pin output socket is really restricted to the EL84, but the octal socket can take any eight-pin valve, including EL34s, 6V6s and others. Overall, it has a vintage-y vibe that sits nicely with its retro looks. The clean and boosted sounds are slightly midrange-biased, especially as the masters for the V10's two output valves are wound up.

There's an audible difference between the Octal and Noval settings, which is as much to do with response and compression characteristics as it is with tone. There's a fatter, less compressed feel from the 6L6, while the EL84 offers a little more chime and top-end bite.

It's also worth saying that the V10 is a lot louder than the 10-watt rating would suggest - easily loud enough for small gigs - but it's also easy to get lovely big, fat and driving tones at house volumes, too.

The boutique amp market is dominated by American brands, but there's room for competition from other countries and Victory has found a surprising niche here. The V10's low noise and wide tonal potential make it a superb small gig, rehearsal and recording tool.

Add a pricing structure that's more than fair for this standard of product and we think Victory has everything it takes to succeed in a tough market, sitting in that elusive area where boutique meets mainstream, and therefore offering the optimum balance of both.