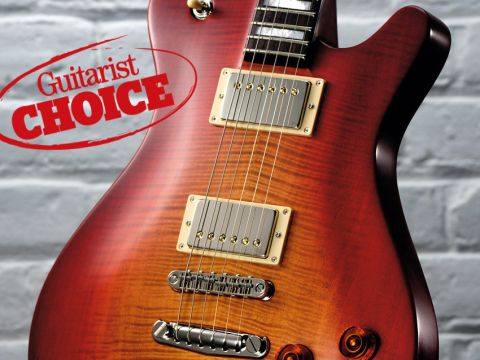 This is the best Vanquish electric yet: a thoughtful, considered guitar with impeccable build, versatile sounds and a more-than-fair asking price.

Adrian Hardman's original Legend design put his fledging Vanquish brand on the map and picked up blues hotshot Ollie Brown as a signature artist. But over the past months, Hardman has taken his vision further with this new single-cut Mystique.

"I wanted to get a bit more resonance and a full-bodied sound, primarily in the low-end," he tells us. "I made the first prototype in August 2009 and have now made 15 or so. Interestingly, it's been twice as popular as the Legend."

Hardman started with the double-cut Legend design, slightly enlarging the lower bouts and adding the upper shoulder. "I wanted to get a mix of the Legend, a Les Paul and a Tele," he explains.

Yet like the Legend we get the angled top from where the neck joins the body to the bridge so the strings sit a pretty much uniform 12mm from the face before the body slopes down into the well shaped violin-like contours of the lower bout. "It's a little thicker overall too," he says, "53mm deep, as opposed to 47mm on the Legend."

It doesn't feel overly bulky though, helped by a deep ribcage contour and trim but not over-tight edge radiusing and a classic single-cut weight of 3.6kg (8lb). The mahogany back is chambered with numerous 25mm wide, 20mm deep slots with a solid centre.

"I did it for resonance, just to get a little more air into it, but to be honest the mahogany I have is very light and resonant," he notes.

The neck is cleverly inset to the body with an angled joint that means the heel area is all but sculptured away. Shape-wise we have an offset profile, fuller shouldered on the bass-side, slightly more sloped on the treble side, but still quite 'old Gibson' in size.

The big frets are highly polished, the fingerboard edges are bound with rosewood and very nicely rounded for a worn-in feel. The inlays are crisp - it's a thoroughly pro job, like the bone nut and overall set-up.

Oh, did we mention we have the Buzz Feiten Tuning System as standard? As a result it's one of the most in-tune and stable guitars we've played - especially for high fret chord work - and we barely had to use the Gotoh tuners during our testing period.

The spliced headstock - rosewood-faced with crisp Vanquish pearl inlay - gives a more contemporary appearance, but the overall design an appealing blend of old and new. Just like the hardware really, which mixes a recessed Tone Pro's tune-o-matic and a proprietary Vanquish tailpiece with its thru-body stringing and immaculately inset string ferrules on the back.

Here you'll also see a dragon 'Tattoo' engraving, a love-it-or-loathe-it custom touch, illustrating what else Hardman offers. The old-looking satin finish is nitro-cellulose (over a very thin polyester base/sealing coat) and done out-of-house by the Sims Custom Shop. "Then I just sand it with a light Scotch-Brite pad," Hardman tells us.

The Mystique looks like any other Les Paul-alike, with dual covered 'buckers (Bare Knuckle Mules with gold-plated pole pieces and small 'V's subtly engraved on the nickel pickup covers), individual volume and tone controls and a shoulder toggle.

Each of the four controls is cleanly recessed into the curve of the top and the barrel-type jack socket is also recessed flush with the side. "Both tone controls have a 0.022k ohm resistor wired from the wiper to ground," says Hardman. "When you turn the tone control down you don't get the fully-off 'woman tone', as it's equivalent to it being wound down to one or two."

Only the neck pickup has a cap/resistor treble bleed network, the bridge pickup is deemed bright enough when turned down. Then we have push-push switches on the tone controls that operate what sound like coil-splits.

The Mystique kicks out a beefy, big-bottomed tone that's muscular with a smooth-nosed attack - a pretty timeless single-cut voice. The bridge Mule has plenty of smooth-but-bright attack; the neck pickup, as you'd expect is full, deep and dark, but not indistinct.

Both volumes clean up the pickups for a very tuneful, older, almost single-coil tone. The bridge's tone control is very well voiced, knocking it back a little really nails a more modern Les Paul's muted grunt and fully off it's far from woofy - add in some gain and vary this tone control (and the volume) and you can summon virtually every Les Paul player's signature tone from Peter Green's clean attack, Kossoff's singing fatness, Moore's bluster and Slash's grind. It should be called a character control.

The split voices - who needs 'em on a single-cut? Well, if you like ring and fatness, the Mystique supplies it. With a clean, reverb'd Fender amp, pick by the bridge and you have a sophisticated Nashville voice; up the gain and you're into classic Tom Petty ring.

Dial in both pickups and experiment with the volumes and tones and you're lost in a stylistic heaven - strident funk, older righteous blues and smoky, jazzier voices.

In certain scenarios these more single-coil-like tones might be a little dark for some, especially the neck pickup, which does sound like it needs a little more clarity. But that's going be a personal consideration - if you have a more gained, sizzling top-end tone it adds another character, something the Mystique has plenty of.

This is a lot of guitar for £2,500 from a maker that's happy to discuss all the fine details = nothing is hidden, a refreshing change. The quality, considered, complex build is matched by sonic nuances that really should satisfy discerning tone-hounds.

Conversely, the straight bridge and neck pickups, in full humbucker mode, capture an excellent old-style single-cut voice that's up there with the best.

Not everyone will take to the Tele/Les Paul styling and that headstock might still be too modernist for some. But here's hoping enough players will bother to support one of our brightest hopes, because if you enjoy craft and tone, Vanquish - increasingly - is looking like a very good, and realistically priced, place to start.