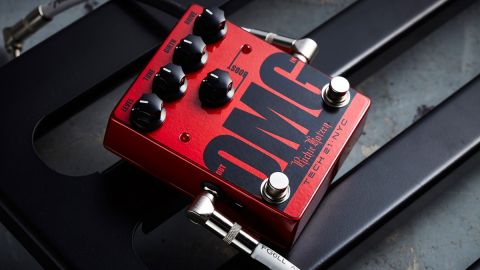 Richie Kotzen and the Tech 21 designers have come up with a practical if pricy variation on the overdrive/distortion pedal genre.

NYC-based Tech 21 and Richie Kotzen - guitarist, singer, songwriter and producer, formerly of Poison, Mr Big and currently Winery Dogs - have collaborated to come up with the OMG, an all-analogue distortion pedal, which also features in Kotzen's signature version of the Fly Rig 5.

The OMG is a dual-footswitch pedal: the left-hand switch operates the distortion, while the right one brings in up to 28dB of boost, set via a knob. Both footswitches operate independently of each other, so you can just use the pedal as a booster without the distortion, if you wish.

The distortion is controlled by the four knobs in a row at the top of the pedal. Level sets the output level, while the Drive knob sets the overall amount of gain and overdrive. Interestingly, you get two knobs to adjust the EQ. The Tone knob offers a flat setting when fully clockwise, but you can wind it back to tone down the high end; Girth is an active midrange control that offers cut or boost with a null setting at the 12 o'clock point.

Disregarding the distortion section for a minute, and engaging just the boost switch, the OMG yields great results as a pure boost pedal - there's plenty there from just minimal volume hikes to getting your valves really cooking.

The pedal was designed to replicate the distortion flavour of a single-power-tube Class A amplifier and kicking in the distortion section yields some natural valve-like overdrive at quite low drive knob settings. With the boost footswitch available to take that up a notch, there's versatility right there in adding a driven extra channel to your amp with two levels of gain, although the higher gain settings can sound a little blown-out or lacking in focus.

All the same, you can access some really saturated and sustaining tones that will suit players on the heavier side of the rock spectrum, especially lead players who like to squeeze out harmonics. The EQ knobs do a great job of matching the sound to complement your amp, with Girth putting some bark or weight in the tone or alternatively dialling in a bit of a scoop.