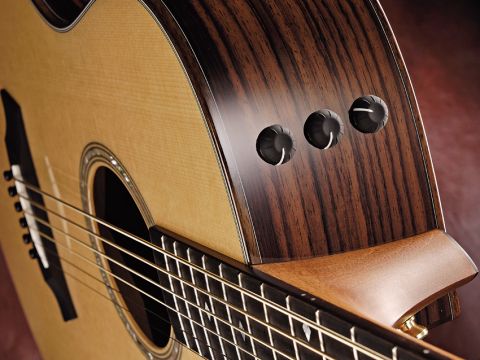 Few acoustic instruments available outside of small luthiers' workshops challenge like this baritone. A unique voice on a mainstream stage.

While the mainstream steel-string acoustic market concerns itself with yet another version of a well-worn instrument, on the fringes there's plenty of evidence that makers are willing to experiment beyond just another dreadnought. An obvious area is multi-string instruments and, increasingly, longer scale instruments that cater for the numerous players that down-tune in standard or altered tunings.

Taylor has already experimented with the former - a nine-string GS was one of its 35th Anniversary models and featured octave-doubled D and G strings and a unison-doubled B string - but not the latter until earlier this year, when it introduced an eight- and six-string pair of baritones.

They use a 686mm (27-inches) scale length, not only extending the length of the neck (which still joins the body at the 14th fret), but pushing the bridge position deeper into that cavernous 413mm-wide lower bout of the GS body.

This extended scale is actually on the short side for the type - the majority of baritones typically run between 686- 762mm (27-30 inches). Why the longer scale? Well, these baritones are designed to be tuned down to B (B E A D F# B) so the extended scale and heavier strings (Elixir 0.016- 0.070-inch) are necessary to retain string tension and tone.

But that's not all: while the six-string baritone is fairly conventional, this eight-string version is grabbing the headlines and, according to Bob Taylor, outselling the lesser-stringed version by a ratio of five to one.

Many of the 35th Anniversary guitars were, says Bob Taylor: "About saying yes to numerous requests we've had over the years for guitars we thought would have limited sales - the 12-fret, parlour, nine-string et cetera. One request was for a baritone, but we'd need to tool up for the longer scale length. So, in the meantime we did the nine-string and learned what the double strings should be.

"A [six-string] baritone is cool," continues Bob, "But it takes you down - after a couple of songs you're worn out! So we thought we'd combine the nine-string with a baritone. But that was too much with the doubled B string, so we just went with the octave-doubled D and Gs - the extra octaves lift the timbre of the guitar - it takes all of two strums and you get it."

What you also get is Taylor's immaculate build. Yes, this is a high-line guitar, but its construction is faultless. The Sitka spruce top is finely flecked, the Indian rosewood back and sides perfectly matched with deep colouration and figure. The rosewood binding, inner purfling and gloss body finish are perfect.

Even with two extra tuners the standard-sized headstock remains elegantly functional, while at the bridge two extra pins are all that's needed to accommodate the additional strings. The bone saddle, however, has been carefully shaped for improved intonation and raises the additional octave strings to the same height as the thicker wound strings - a seemingly small detail that means those octaves don't get lost when you pick.

Taylor is known for its fast-playing necks and here the slightly 'V'-shaped profile is immediately comfortable; the nut width is standard for Taylor's 12-strings, likewise the saddle spread.

Inlays are subtle classic pearl diamonds, the fret gauge is small and it's all flawlessly fitted - including the ebony fingerboard's rosewood binding - and again this is all perfectly executed with an understated elegance.

Along with its elegant Venetian cutaway, it's powered with Taylor's proprietary Expression System with its two "strategically placed" Dynamic Body Sensors on the underside of the soundboard that "capture the complex nuances of the top's vibration, while a Dynamic String Sensor mounted beneath the fretboard extension registers string and neck vibration."

These pass to a purpose-designed preamp with three centre-notched controls: volume, treble and bass. Since 2007 Taylor has added a fused string ground plus two on/off switches on the preamp board, accessed via the soundhole, which allow you to turn off one, or both of the Body Sensors.

Acoustically the GT-8 sounds quite spectacular. The low end is impressive though not overbearing, the high strings are thick and chewy and those doubled octaves are rich, piano-like and balanced in terms of volume. But it's a lot to digest in terms of playing style.

Full-voiced chords sound huge and partially voiced chords, especially with the low strings open, create beautiful bass/12- string effects. To these ears it's quite a modern tone that you could hear within a solo artist's repertoire, less so on jazzier or bluesier bass/chord parts. It especially suits modern percussive styles.

Amped it takes on a slightly different character as the octave doubles are much more prominent, especially the A (fourth string), and careful EQ'ing is necessary to balance the low strings. The Body Sensor switches aren't very easy to access and their tonal effect is most obvious at higher levels, where you can experiment switching one or both out if things get too lively - the under-fingerboard pickup on its own produces a very good sound that actually suits the baritone's deeper nature.

You'll have to brush up on your transposition techniques if you're playing with other musicians and get used to those heavier strings, but sound-wise the GT-8 is an open book for the creative musician wanting to explore different sounds, textures and styles.

The GT-8 is everything you'd expect from Taylor: intelligently designed, flawlessly built with superb playability. Its high-end quality specification is reflected in its hefty price although 'street' prices in the UK, at least, seem substantially lower than the quoted RRP, which makes it fair, if far from an impulse purchase.

As it stands, its fantastic creative potential would seem limited to pros or well-heeled enthusiasts - a big shame. It's not a guitar for everyone, but for the many creative players and singer-songwriters out there the potential offered by the GT-8, and the GT-6, is too good to be ignored. Now that they're tooled-up for the longer scale, Bob Taylor conceded that, "we could make a 300 or 200 series baritone, it deserves to live." A lower cost version would certainly broaden the appeal - here's hoping it happens soon.