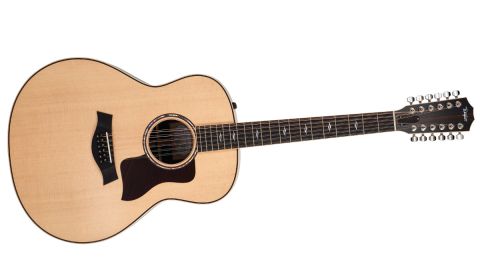 The 858e's sparkling wall of sound will doubtless find a home in many players' hearts.

Just to give you some idea of exactly how new this model is, the paper label in the soundhole merely bears the word 'proto' - short for 'prototype', of course - instead of a model number.

However, Taylor assures us that what we're looking at is a 12-string guitar belonging to the 800 Series. Also, as we've seen in recent years, this model is representative of the rethink and redesign initiative going on at Taylor today, where luthiery expert Andy Powers has been tinkering away with bracing patterns, wood combinations and so on in the interests of bestowing even more mojo upon Taylor's already considerable reputation.

The company's experience with 12-string acoustics goes back to 1972, when Bob Taylor saw an Eko 12-string in a shop window and, not being able to afford to buy it, decided to build one, thereby beginning a journey that was set to last a lifetime.

With the 858 we find a large body, with a change of gear in terms of timbers, too. Whereas the previously reviewed 562ce is an all-mahogany affair, the 858 is sporting the arguably more traditional combo of a sitka spruce top with Indian rosewood back and sides.

If you're thinking bright, with plenty of depth and power, you'd be just about on target - and if you're wondering what was going on in Andy Powers' mind when he rejigged this particular model, wonder no more.

"A classic, massively powerful 12-string guitar for that player who's strumming from the elbow, accompanying their voice with this huge wall of sound. That's undeniably cool in the right context. It gives you something powerful and gets people's attention.

"These new guitars have an entirely different internal architecture to make the Grand Orchestra work specifically as a 12-string. They preserve the dynamic range and balance the Grand Orchestra is known for, but have more structural integrity to accommodate the amount of tension the 12 strings impart on the top."

'Powerful' is certainly the right word to use here as the 858's voice is massive - and in a good way, too. Its voice is expansive, with good but not overpowering basses and shimmering trebles, which, together, seem to fill just about every nook and cranny you could possibly want.

With a similar string spacing, nut width and so on as its little brother, the 858 isn't shy of producing some fine fingerpicking, but big pick-fuelled chords are definitely its forte.