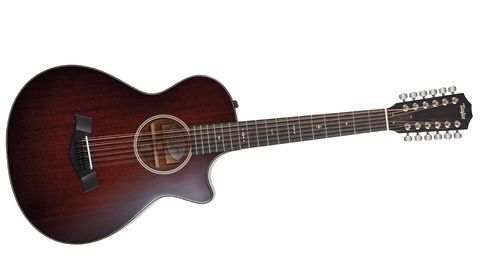 Taylor's new 12-strings are something to get excited about - they'll be in the shops this February, and so if a new 12-string is in your sights, seek one out!

Just to give you some idea of exactly how new this model is, the paper label in the soundhole merely bears the word 'proto' - short for 'prototype', of course - instead of a model number.

However, Taylor assures us that what we're looking at is a 12-string guitar belonging to the 500 Series. Also, as we've seen in recent years, this model is representative of the rethink and redesign initiative going on at Taylor today, where luthiery expert Andy Powers has been tinkering away with bracing patterns, wood combinations and so on in the interests of bestowing even more mojo upon Taylor's already considerable reputation.

The company's experience with 12-string acoustics goes back to 1972, when Bob Taylor saw an Eko 12-string in a shop window and, not being able to afford to buy it, decided to build one, thereby beginning a journey that was set to last a lifetime.

Taylor describes the 562ce model as being very "lap-friendly" and we'd have to agree. It's very petite and certainly not of the dimensions that spring to mind when considering a standard 12-string.

It's compact, relatively light and eminently playable - but let's not get too carried away before we look beyond first impressions and take a glance at the rationale behind its place in Taylor's 2016 catalogue.

Over to Andy Powers: "The 12-fret is very forgiving and accommodating of many styles," he tells us. "It's comfortable, and there's a nice singing quality that you can get out of that guitar. I like the vibrant character of the midrange. This design is very physically efficient, so it has strong projection. Despite its smaller physical size, it sounds like a huge instrument. I like that I can get this husky power from a compact guitar."

In order to produce some of these characteristics, Taylor has elected to use tropical mahogany for the top, back, sides and neck of the 562. Known for its ability to produce singing warmth from smaller bodied instruments, mahogany certainly shows its hand here and is, no doubt, at least partly responsible for that "husky power" that Andy Powers wanted to conjure up from this guitar.

As you might expect from one of the premium builders in the world today, workmanship is nigh-on impeccable, even on our prototype. But what about its playability? One thing that struck just about everyone in our office who picked it up was its ease of playing.

The action is low, which is one factor that would bring about a user-friendly interface, but the other is the reduced tension in the strings and the wider nut, meaning that the first few frets don't feel crowded and impenetrable to the fretting fingers. Furthermore, the string spacing at the bridge means that fingerstyle is a breeze - and that's got to be good news for all the budding Leo Kottkes out there!