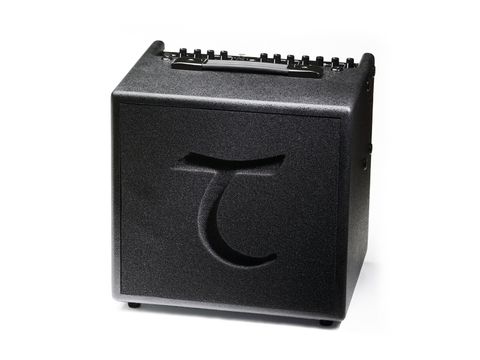 If you're looking for an acoustic amp, this should definitely be on your list.

When performing live, an acoustic guitarist is generally either trying to make themselves heard above the chatter of a cafe or pub crowd, or running through the public address system in a larger venue.

In both scenarios it makes sense to have an acoustic combo, such as the new 60-watt Tanglewood T6 on your side. A good amp will blast your noise to the back of the room in smaller venues and earn its keep as your stage monitor in bigger sheds.

The T6 has a line out socket that enables you to run it to a PA without shutting down its built-in 8-inch speaker. That means you get the window rattling volume you need to rupture eardrums without compromising control over your onstage sound.

The T6 has two channels: channel one is for guitar and channel two is prepped for a mic or line-level source. Here, we're going to concentrate on channel one.

Upon plugging in our Takamine electro-acoustic, the first thing to do is tweak the 'high/low' button. If your guitar has a battery-powered preamp like ours, select the 'low' setting. Choose 'high' for low-output soundhole pickups and stick-on bugs.

Now it's just a matter of balancing your guitar's controls and the amp's three-band EQ to get your sound. FYI, there is a red 'clip' indicator that ignites if you overload the channel. Don't panic - just drop the gain until the LED extinguishes then boost the master volume.

The T6 has plenty of headroom and top end sizzle, although there is a 'contour' control if you need to boost the treble. We like the dedicated DI, line out and MP3 sockets, and how the T6 can be mounted on a speaker stand for improved sound projection in smaller venues.

We're not so blown away by the onboard effects. The wet-sounding Hall reverb is OK, but the Plate and Chorus are anaemic and uninspiring. There's no way to tweak the delay, which is annoying.

The delay time and regeneration are set, so if you don't like the sound, tough. You can run your stompboxes and FX units through the amp's send and return sockets and assign them to each channel with the effects pan knob.

We don't regard the pants onboard effects as a deal breaker. The T6 is a great-sounding, ultra-portable amp that offers pro-quality tone and bags of headroom at an affordable price.

You can buy a padded gigbag (£39) for the T6, which offers neat storage for your cables and great protection from damage.

Of course, all that padding won't protect the T6 from some mighty stiff competition, not least the diminutive but powerful ZT Lunchbox Acoustic (£389). We reckon you should try as many acoustic amps as possible, including this one, before you make any decisions.