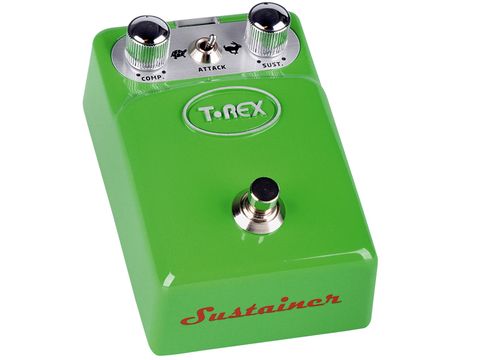 Useful tool if you want sustain with clean sounds.

The latest in T-Rex's more affordable ToneBug series is the Sustainer, a pedal that compresses your signal then adds gain. Running from a battery or a standard 9V power supply, the Sustainer features two knobs to control the effect and a two-way switch to select slow or fast attack.

The compression knob ramps up the amount of compression by simultaneously giving you a higher ratio and a lower threshold as the knob is turned. With fast attack selected the compression kicks in almost instantly, whereas the slow attack lets through a little more of your initial note or chord before compression begins.

At lower compression settings you can get pretty straightforward squeezing, which is useful for keeping chords and picking at consistent levels.

Wind up the compression knob, though, and you can conjure up a distinct effect where the compressor initially clamps down on the note or chord you play, which is then followed by a swell in volume. This is a nice effect to keep chords hanging in the air or for Santana-style legato sustain on single notes, with higher levels of the sustain knob helping them sing longer or take off into feedback.

More sustain without dirtying up the tone is a desired goal of many players, and here's a pedal that can help achieve that while also capable of some standard compression tasks.