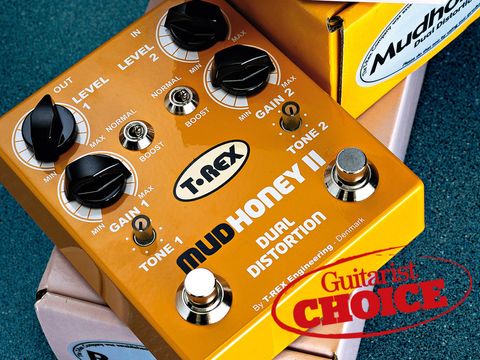 This is effectively two overdrive/distortion pedals for the price of one pedalboard slot.

What we have here will be familiar to anyone with experience of the classy range of pedals made by Danish effects firm T-Rex. However, while the name may be the same, this is a completely new pedal.

The Mudhoney II takes the basic premise of the original Mudhoney distortion pedal and doubles it to put two distortion effects into a single box.

The Mudhoney II offers two identical distortion channels each with their own footswitch and set of controls consisting of large level and gain knobs, a smaller tone knob that lights up when the channel is active and a two-way normal/boost switch that selects either moderate or high-gain for the channel.

The idea with the Mudhoney II is that you can set up two different distortion sounds to be called up individually at will. You can't use both channels together - if channel one is active and you press the channel two footswitch, channel two will be selected and channel one turned off and vice versa.

Power comes from a 9V battery or a power adaptor. The battery compartment, with its hinged plastic cover located on the bass of a pedal, is solidly secure but can be quickly levered open with the corner of a guitar pick should your battery die onstage.

The number of controls on the Mudhoney II suggests a huge amount of versatility lurking within and, plugged-in, the pedal doesn't disappoint with the two channels offering various methods of use in a live setting.

With gain at minimum, boost selected and level up, the Mudhoney II offers a small amount of clean boost that some may find useful but the pedal's real strength lies in smooth, valve-like overdrive.

With boost off, the gain knob runs from mild break-up and crunch, through all shades of natural overdrive with good note definition and excellent sensitivity to playing dynamics - dig in harder and you'll get more dirt.

It's the sound of your amp, but more distorted, and if you set different amounts of gain for each channel you can effectively turn a single-channel amp into a three-channel one.

If you'd like more top to cut through, the tone control covers just the right frequency range for that extra edge. Whereas, without the boost engaged you're in similar territory to a Tube Screamer, bring it in and the overdrive gets thicker moving towards harmonically rich, full-on classic distortion, confirming the Mudhoney II's versatility.

Putting two distortions in a single box is a great idea that adds versatility to a pedalboard without increasing the number of audio and power cables needed.

The concept works best if such a pedal can provide two scenarios - the first being to provide exactly the same tone but with two different amounts of gain, the second being to provide two sounds that are sufficiently different from each other to provide real contrast within a song or a set. The Mudhoney II, with its practical array of controls, can do both.

Overdrive? Distortion? Call it what you will but the Mudhoney's capacity for dialling in the dirt will not disappoint. So then, an excellent pedal with loads to recommend, albeit with a high price tag.

Listen to our audio demos for few examples of the sounds the Mudhoney II can make: