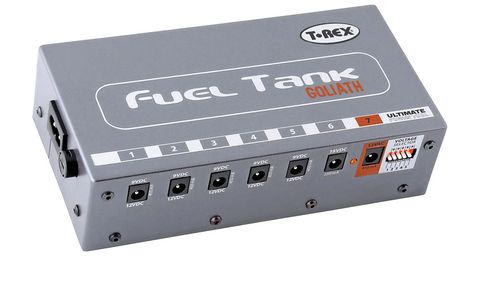 It's not the cheapest example on the market, but the Fuel Tank Goliath demonstrates T-Rex's unending dedication to improvement. A highly capable power supply.

Since its inception back in 1996, T-Rex has made an impressive imprint on the effects world, thanks to an ever-expanding range of carefully engineered stompboxes and accessories. One of the company's biggest successes is the Fuel Tank range of power supplies - and we have the most recent update in the form of the Fuel Tank Goliath.

With a capacity befitting its name, the Fuel Tank Goliath offers a whopping 3,000mA of power for pedals - almost double that of the Fuel Tank Classic and Chameleon. It delivers the goods via seven outputs: five 9/12-volt outputs at 450mA each, one 18-volt 250mA output, and a 12-volt AC output at 450mA. Finally, all that comes in a weighty 1.4kg metal enclosure, with switchable 115/230 voltage.

In the box, you'll find a pedalboard mounting plate, plus just about every right-angled power cable you could think of, including mini-jack, polarity inverter and current-doubler options. But while other pedal power supplies offer more isolated outputs, the Goliath produces enough milliamps to allow you to daisy-chain multiple pedals from one output - a link cable is included for this purpose.

Try as we might, we couldn't overload the Goliath. It copes admirably with power-guzzling digital delay units, valve-powered drives and daisy-chained analogue pedals - all without hum or hiss. But while the 18-volt output is a boon for anyone who likes increased headroom on compatible overdrive pedals, most users will struggle to find use for the 12-volt AC output. Still, there should be enough power from the other six outputs to satisfy most pedal hounds.

It's not the cheapest example on the market, but the Fuel Tank Goliath demonstrates T-Rex's unending dedication to improvement.