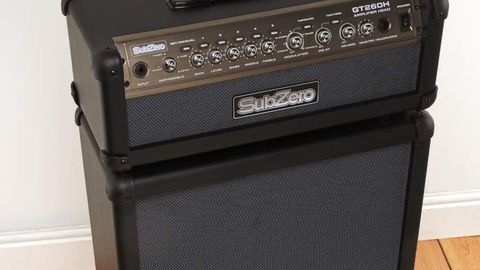 You get a lot of power for your money - 120 watts is not to be sniffed at, and it's more than you're likely to find elsewhere at this price. Add to that the sheer cool factor of having two amp cabinets, and it's clear that the GT260 has got real appeal.

Everybody loves a bargain, and that's certainly what the GT260 appears to be when you first unpack it.

We've seen modelling amps range from tacky, plastic combos to plush, boutique-styled heads, and it's good to see that the GT260 has managed to avoid the former category by some margin.

A brushed metal front panel complete with blue lights makes you feel like you've picked up a quality product, but it's all about the tone here so the real test is in the playing of this modern amp modeller, and our expectations are high.

We've seen some great-sounding amps ruined by the inclusion of an LCD screen, so the GT260 scores brownie points straight away for building all its features into a very traditional layout. Dialling in a sound is as easy as can be: whirl the amp knob around to your preferred flavour, work your way through the gain, output and EQ to balance things out, add a splash of effects at the end and Bob's your uncle. You can then even save your sound to one of five preset switches - a great feature to have on board.

There are four different categories of amp, each with two distinct models. These are categorised as clean, tweed, fuzz and metal. It might not seem like a huge list but it covers just about every genre you could need.

Starting off with the clean models, there are two pristine sounds on offer that won't distort no matter how hard you push the gain for maximum headroom. This is particularly handy for metal players who want a clean sound that can hold its own against lashings of distortion.

With a bit of EQ tweaking a variety of cleans can be achieved, from bright and shimmery to plummy and moody. If it's touch response you're after, the two tweed models will happily oblige, giving a wide gain range that spans subtle grit to a generous crunch at the high end.

On the distortion side of the fence, the fuzz and metal models have more than enough to go round. The fuzz models have a more vintage response, but their label is perhaps a little inaccurate. In any case, there's plenty of Marshall-esque raunch and rasp.

The metal models take you in the direction of Dual Rectifier-style carnage. Sledgehammer riffs and squealing pinched harmonics are a cinch in these settings, but depending on your guitar you may want to be a bit careful with the gain control - you run the risk of muddying your sound if you take things too far.

The selection of effects is basic but perfectly functional, including chorus, flanger, phase and tremolo, plus independent delay and reverb. Control of the effects is fairly limited as you'd expect, but the cool thing is that you've got two tap switches to set either the rate of the modulation effect or the tempo of your delay. This is a really simple way of tailoring the effects and goes a long way towards improving their functionality.

It's no secret that the modelling amp arena is full of fierce competitors, but the GT260 holds its ground admirably. While the fidelity of the sounds isn't quite on a par with some of its rivals, we like the amp's touch responsiveness and the two portable and articulate cabs.