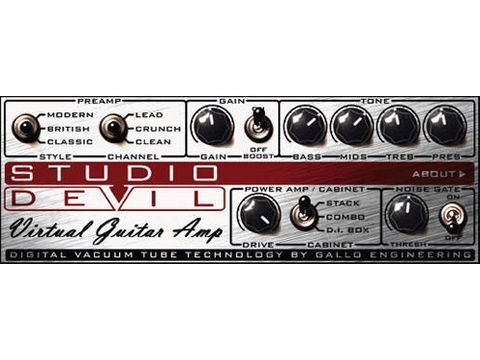 Like many real amps, VGA is straightforward in operation, but it's also considerably more flexible. At this price, everyone should own it.

With the likes of IK Multimedia, Native Instruments and Line 6 all turning out impressive multi-amp, multi-effects software, you could be forgiven for thinking that there's no room for small companies like Studio Devil to produce a desirable product.

You'd be wrong, though. While the 'big three' produce comprehensive packages, they're prohibitively expensive for many. By focusing on just one thing - amp emulation - Studio Devil has produced an excellent product at a budget price.

Virtual Guitar Amp has a GUI to match its no-nonsense name: one panel and that's your lot. There are three 'styles' for the amp sims: Classic, based on Fender, Vox and Peavey models; British, based on Marshall and Laney; and Modern, based on Matchless, Mesa Boogie, Soldano and Marshall models.

Each category has clean, crunch and lead channels with a separate Gain knob and a Boost switch for those who really like it hot. There's a power amp/cabinet section where you can select from either a Stack or Combo cab emulation or a DI box (ie, no cab emulation). There's also a realistic Drive control to simulate power amp compression.

The ethos behind Virtual Guitar Amp stems from the developer wanting to emulate a particular type of valve preamp (the 12AX7A) which Studio Devil says most tube amp designs are based upon.

Whatever the technology, the sounds are impressive; we found it easy to recreate the timeless vintage tones of bands like Cream and Led Zeppelin. Furthermore, as the gain is increased, the distortion stays tight and punchy without descending into a fuzzy mush.

The controls are very useful in that they all have a noticeable impact on the sound, so you never find yourself asking what a particular switch is actually for (which can be the case with some units). This means that, despite there being only a single screen, there are a lot of tonal options available in this compact setup.

Special mention should be made of the excellent noise gate, which keeps unwanted noise out without encroaching on sustain. It seems a funny thing to get excited about, but it's easy to get frustrated with an unintuitive noise gate that either lets too much noise through or mercilessly hacks the ends off chords and solos.

Because Virtual Guitar Amp focuses on amp simulation, it stops short of including effects of any kind (there's not even a reverb). Looking at this pessimistically, you could conclude that VGA is not an effective standalone unit.

You could also say that the lack of any high-gain distortion units makes reproducing modern metal sounds - which often make use of an additional distortion unit - rather tricky.

What you should remember, though, is that most DAWs come with a stack of plug-ins and that, at just £40, Virtual Guitar Amp is an absolute bargain.

It's that last point that makes it easy for us to award VGA the full five stars: this is a worthy addition to any plug-in folder - even one that already includes the likes of AmpliTube and Guitar Rig. And if you're looking for a budget virtual amp, you should place your order immediately.

Take a listen to what Virtual Guitar Amp is capable of: