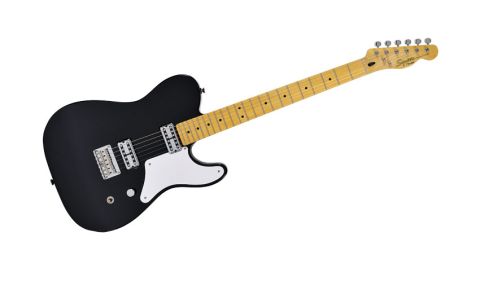 An impressive sonic performance from a guitar that nails the Cabronita mojo at a dangerously attractive price point.

There's just something about the Cabronita. Who'd have thought that shoving a couple of Gretsch-y pickups into a solid slab of wood and strapping on a hardtail bridge would result in one of the sexiest Telecaster variations ever? Now, the range has expanded to include Thinline and Squier versions of the 'little bastard', but this model already has a considerable history behind it.

Back in 2009, Fender's Custom Shop revealed the La Cabronita Especial, a stripped-back Tele with Gretsch-esque TV Jones pickups. It was complemented by a relic'd nitrocellulose paint job and modern six-saddle hardtail bridge - plus a depressingly high price tag. So, rather than fork out for the real (expensive) thing, enthusiastic guitarists simply bought the individual parts and made their own Cabronitas, then proceeded to share their creations with the world via the interwebs.

Understandably, Fender soon twigged that they were on to something, and released a Cabronita Telecaster as part of 2011's Telebration series. It was cheaper, but not by much - the SRP was still £1,810. It took until 2012 for Fender to announce a made-in-Mexico Classic Player version of this much-revered guitar, with Fideli'Tron humbuckers and a high-gloss poly finish cutting the price down to a cool £646 - now we're talking.

So, what's new? Well, now Squier has got in on the act, issuing its own Chinese-built Cabronita in the Vintage Modified series, featuring a pair of Fideli'Tron humbuckers, hardtail bridge plus a maple neck and fingerboard.

To cram all that Cabronita panache into a sub-£300 axe is an unenviable job, but Squier has pulled it off - with a few compromises along the way, which are to be expected.

So, rather than ash or alder, you're saddled with a basswood body, which only comes in one finish: a polyurethane Black, as opposed to the Fenders' various gloss polyester finishes.

Build quality isn't quite up to the Mexican factory's level of attention, either: a few specks of finish had come off around the pickups on TG's review model - but hey, that officially makes our guitar pre-relic'd!

Aside from having the same pickups as the Mexican Fender Cabronita, the Squier also earns bonus points with its superior string spacing at the bridge - there's no misalignment with the pickup polepieces here. That makes for a more comfortable playing experience at the dusty end of the neck, even if the polyurethane finish gets slightly stickier under the stagelights than its Mexican counterpart's does.

The tones onboard have a slightly different feel, too - the Squier's basswood body lends the Fideli'Tron 'buckers a darker sound overall. So, while you aren't treated to the Mexican Cabronita's chime, this Vintage Modified version possesses a warmer, bassier quality that's well suited to extended chords and clean leads, but can still deliver plenty of snap with overdriven tones.