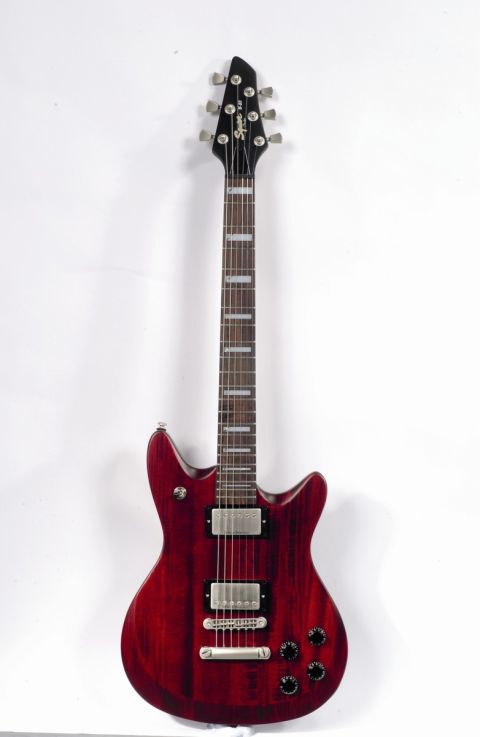 The M-80 best serves players who want a bold, dense humbucker sound to propel their dirty riffs and foundation-shaking rhythms.

Through Squier, Fender has a history of producing instruments that give the high-end USA guitars a genuine run for their money.

Just as we were recovering from being knocked out by the great quality and value of the Telecaster Customs, '51 and new Jagmaster, another set of new Squiers on the block arrived in the shape of the Master Series.

This time around, however, Squier has strayed much further from the traditional Fender design staples and has moved towards twin humbuckers, shorter scale lengths and mahogany construction.

The design of the solid mahogany M-80 (designed by Fender Custom Shop Master Builder, Todd Krause) finds itself camped firmly in what some Fender loyalists might deem to be enemy territory.

It may be one of the most uncharacteristic Squier designs we've ever encountered, but there's nothing wrong with diversity if the execution is successful - and first impressions indicate that the M-80 is a tasty package.

The neck is certainly a meatier palm-filler, with a couple of millimetres' worth of extra width, and the instrument as a whole feels less like a guitar for bluesy lead playing and more one for uncompromising aggression.

The satin finish and lack of fingerboard binding, as well as the soft fingerboard edges that feel very lightly rolled, contribute to a familiar, straight-ahead feel.

With an attractive slab of rosewood for the fingerboard, the M-80's headstock is anchored to the mahogany neck via a scarf joint that again stretches between the first and the third fret.

The more compact body outline is evocative of something like a Gibson SG, although a little weightier than you might expect.

Again, the top horn position of the three-way toggle pickup selector is evocative of Gibson, or Fender's 1970s variations on the Telecaster theme.

The proximity of the pickup selector to the neck pickup may be an issue for some players, but most Les Paul or Telecaster Custom players will tell you that it's easy enough to work around.

Indeed, players who roll off one of the pickup volumes and use the toggle for staccato 'killswitching' may find this position preferable.

Put through its paces without amplification, the M-80 has a robust confidence and attitude, which gives the impression that it can cope with the heaviest riffing and plenty of sweaty live abuse.

While the clean voice is not as velvety as a good Gibson SG, there's a highly useable, if unremarkable, set of clean options.

Chord voicings can become a little woolly and indistinct when using the neck pickup alone as the dense mahogany body provides a dark platform for the Duncan Designed humbuckers.

However, any clean shortcomings are swept aside when you throw more dirt into the equation. Big, belligerent riffs are furnished with more than enough bark and grind to shake up even the meanest of mosh pits.