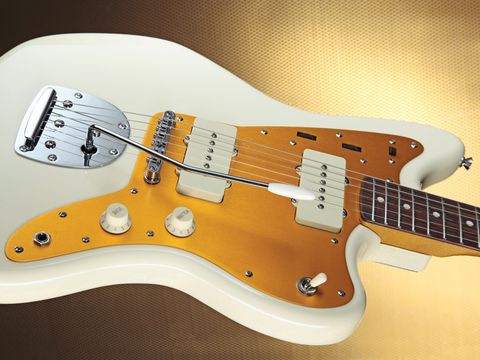 An appealingly left-field addition to the Squier stable.

Just as 'jazz mags' aren't really about jazz, the Fender Jazzmaster isn't strictly aimed at cappuccino-sipping noodlers in polo neck sweaters. Truth is, the guitar's offset design left the jazz fraternity cold on its launch at the 1958 NAMM show.

But the Jazzmaster's resurrection arrived in the late 80s, when it became the alt-rock Excalibur. In this role, it was wielded by a club of awkward young men, including Robert Smith, Thurston Moore and J Mascis. "It's all I could afford at the time," recalls the Dinosaur Jr. man. "Les Pauls are too smooth. I like the guitar to fight back."

Never a flagship model, the Jazzmaster has drifted in and out of fashion, and there's not a huge choice in 2012. Even Fender's version of Mascis's signature model is now out of production, replaced by this entry-level Squier.

It seems like a steal compared with the Fenders, which kick in circa £600, but less so next to Squier's Vintage Modified Jazzmasters, with their RRP of £334.

Anyone who's seen Mascis's Jazzmasters will be disappointed by the anaemic look of this model, whose vibe isn't so much grunge as Goodfellas. Visually, a reverse-of-headstock squiggle is Mascis's only contribution, although he's clearly been consulted in the decision to ditch the old-school and notoriously buzzy bridge for an Adjusto-Matic (a mod he makes to his own Jazzmasters). It's a small point, but makes this model feel more steady and road-worthy.

Jazzmasters and Jaguars are often lumped together, but they offer a massively different playing experience. This Mascis model has a standard 25.5-inch scale, and although it's only got 21 frets, there's a real sense of control and a tight feel to this C-profile neck.

What's more, there's jumbo fretwire to support the frantic soloing you'll want to nail if you're a fan. The vibrato bends smoothly and snaps back to pitch, while the weight distribution is bang on whether you're sitting or standing.

The best thing about this axe, though, is that the classic Jazzmaster switching system hasn't been watered down. You'll find it confusing to start with, but it's endearingly kooky.

With the black slider switch disengaged, pickup selection and tone control are as per normal, using the three-way selector and lower controls. Engage the slider switch and only the neck pickup functions, with dedicated roller controls for volume and tone (it also sounds warmer).

If it seems fiddly, consider the advantages at a gig, where you can be scorching on a white-hot lead and then flick instantly to a super-mellow rhythm sound (with brightness and volume preset). It's a feature that's not on the Vintage Modified Jazzmaster, and instantly justifies this Squier's price tag.

Versatility is one thing, but the knockout punch here is the tonal quality. Similar in construction to the P90, these Jazzmaster singlecoil soapbars are wound wide.

While they haven't got the classic Fender snap, they're clear, full and woody when clean, and break under distortion into a huge grunge grind. If you're bored of humbuckers and standard singles, you'll find them refreshing.

Similarly, in a world of Strats, Teles and Les Pauls (and derivatives), this Jazzmaster feels a bit different. However you feel about its creator, it's well worth getting your claws into.